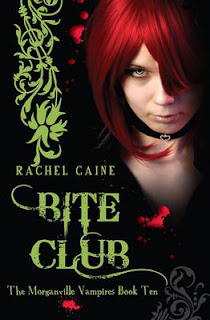 Blurb:
Having survived a number of adventures with her new night-dwelling friends, college student Claire Danvers has come to realise that for the most part, the undead just want to get on with their lives.

But someone else wants them to get ready to rumble.

There's a new extreme sport being broadcast over the internet: bare-knuckle fights pitting captured vampires against one another, or worse, against humans. Claire soon discovers that what started as an online brawl will soon threaten everyone in Morganville. And if they want to survive, they'll have to do a lot more than fight...


My Review:
In the latest instalment in the Morganville vampires series, trouble is afoot yet again but this time, we experience far more than the normal struggles of Morganville. Unlike all the previous books, the tight-knit Glass house occupants are suffering; the danger is coming from one of their own. Whenever there has been trouble in the past, they have always fought it together, but this time, it's up to the girls to try and save not just Morganville, but Shane and Michael too.

Bite Club mostly focuses around Shane. We actually get to see some of the events that unfold through his eyes which is unprecedented throughout the series. It also focuses a lot on his relationship with Claire and his conflicting feelings concerning Michael's vampire-ness. We see what really drives Shane and how his character has been influenced throughout his life by his father, and also the vampires he is forced to live side by side with. We really get to see the effect this has been having on his psyche, especially recently. After a little persuading from a vixen vamp (who could have given Ysandre from the days of Bishop a run for her money), Shane's past and present come crashing together to create a jealous, paranoid and anger-filled Shane. Oh so much anger!

Being book ten, we are already strongly connected to many of the characters and it is actually sometimes painful to read about all the things Shane is experiencing, as well as the hurt he inflicts on those around him, especially those he loves the most. Could this be the end of Shane's friendship with Michael? And what about his future with Claire?

There is less involvement from Eve, Michael, Oliver, Amelie, Monica, Richard and the local police. Claire, Shane and Myrnin make up most of the story, which is mostly fine with me. Oh how I love Myrnin :D

Bite Club returns to the darkness and brutality we had in Lord of Misrule. Some unexpected old foes return, Claire receives some surprising news, and there is major doubt as to what the future holds for Claire, Eve, Michael and Shane. Faced paced, surprising and satisfying. And no cliff-hanger!