The Comet Box by Adrian Stirling 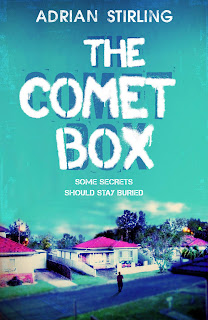 Blurb:
It's 1986 and Halley's Comet is hurtling towards Earth. Everyone's talking about what the comet will bring: wishes could be granted, great disasters could happen.

Andrew's wish is that his runaway sister, Amelia, will finally come home. But as the comet approaches, he begins to learn why she left, and the more he knows, the more he wants to forget. Will Amelia's return tear his comfortable world apart?

In A Nutshell:
A slice of Australian suburban life in the 80's when a teenage boy becomes curious about the secrets of his neighbours and his own family. An insightful page-turner.

My Review:
The Comet Box is the story of one boy as he searches for answers in his slice of suburban Australian life in the 1980's. I don't think I have ever had so much trouble writing a review before. I really enjoyed it, but I have no idea why! I'm failing to put it into words but it's just a feeling that I had while reading it. It was a total page-turner but I can't pinpoint why it was, which is absolutely useless when trying to write a review!

Andrew is a curious fourteen-year-old who likes knowing what is going on around him. He believes he is pretty clued in to everyone and that there isn't much he doesn't know about his classmates and neighbours. What he discovers throughout The Comet Box is that curiosity is not always a good trait to have because once you know something, you then have the responsibility of what to do with that knowledge. How will your decision effect others? What do you do when things fall apart, when you find out that your perfect world is actually not so perfect?

I think the intrigue is because all the secrets and lies that are floating around in Andrew suburbia could very easily be those of anyone's neighbours. And the problems that Andrew's family faces, could be any family's problems. You never know what is going on behind closed doors. Everyone tries to present the perfect life to prying eyes, but usually, nothing is as it seems.The story isn't propelled by major action or teen drama, but is more subtle, with an underbelly of secrets swarming around the streets of Merton. As it simmers, it pulls you in.
Thank you to Penguin Australia for this review copy.
Posted by Jess - The Tales Compendium at 3:39 PM