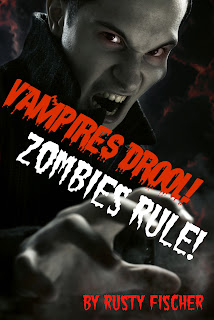 My Rating: 4/5
Blurb:
The Vampires and Zombies at Barracuda Bay High School have a long-standing truce: don’t mess with us, we won’t mess with you.

Of course, if the human kids at Barracuda Bay High knew they were sitting next to the Living Dead in homeroom, well… all bets would be off.
So when Lucy Frost tries to use the fancy heat-sensored paper towel dispensers in the C-wing girls’ room during a busy break from classes, Fiona Rutherford, the nosiest reporter on the Barracuda Bay Bugle, just happens to witness it. But when she jokingly refers to Lucy as a “zombie,” in the next day’s paper, Fiona unknowingly sets off a chain of events that will change Lucy’s life forever.

Now the vampires want to do away with Fiona, and the only zombie who wants to save her is Lucy. Suddenly Lucy is the only hope Fiona and the rest of her friends have of surviving!
In A Nutshell:
With plenty of zombie humor and sarcasm, Rusty Fischer has adapted the general zombie lore to make way for zombies to have a proper place in YA fiction. Very cool.

My Review:
Lucy is just a normal high school girl trying to get through classes, avoid drawing attention to herself and hope that her crush asks her to the Fall Formal. She's also a zombie. The freezing cold, eat your brains, strong as steel kind. After one tiny little mistake, Lucy has one school day to try and defuse what a Normal decided to publish in the school paper before the zombie and vampire equivalent of the secret service pay her a visit.

Written with plenty of zombie humour and sarcasm, Lucy must come up with a plan to avoid a zombie-vampire apocalypse, go up against the absolutely repulsive vampires that also attend the school, try to avoid getting her new AV Club human friends killed, not freak out the boy she likes and save her own zombie self. Is that too much to ask? Maybe...

I must say, Lucy is one crafty zombie. Unlike a lot of zombie folklore, these zombies are actually pretty smart and fast moving. I mean, they eat brains, shouldn't that make them smart? Lucy comes up with some sneaky plans to avoid the vampires and then attack them but can she count on her zombie friends not to stab her in the back when she tries to save not only the person who outted her, but a human?

I really like the way Fischer has adapted the general zombie lore. It's very cool and makes way for zombies to have a proper place in YA fiction (rather than the mindless drones that are usually featured).

Rusty Fischer is the author of countless zombie short stories (my current favourite being Zombies Don't Sleep) and poems, as well as the newly released novel Zombies Don't Cry. I found that being able to read some of Rusty's work before buying his new novel was really helpful and I was left craving more of his zombie stories.

For information on where you can find Rusty's stories and poems, some of them for free, head to his blog.

To buy Zombie's Don't Cry, head to Amazon or The Book Depository
Posted by Jess - The Tales Compendium at 8:59 PM