Today I have a special treat for you all. 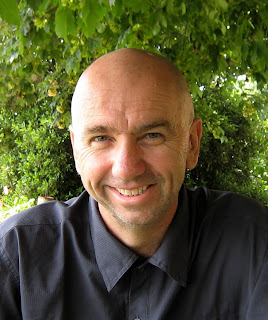 Australian author Steven Herrick has very kindly answered a few questions about his soon to be released YA novel Black Painted Fingernails.

Herrick has written more than eighteen novels for all ages in either verse or prose.

He has won the New South Wales Premier's Literary Awards twice (and been short-listed three times), the Australian Speech Pathologists Book Award in 2005, been short-listed for the Australian Children's Book Council Book of the Year Award four times, his 2010 release, Slice, was one of the Notable Books for Older Readers with the CBCA, had two books named on the honour lists of the CBCA and been highly commended by the Children's Literature Peace Prize.

It seems to me, he is a force to be reckoned with.

Where did the idea for Black Painted Fingernails spring from?
It began as a verse-novel about an insecure young man who meets a free-spirited woman, but after many attempts at writing the main female character in verse, I gave up and left it alone for two years. When I approached it afresh as a prose novel, I found it much easier to write. And it allowed me to also add chapters on the parents, which I enjoyed immensely. These chapters were written after our two sons had left home, so I felt keenly the pain of the parents.

You usually write novels for young adults in verse. What changed your mind when you wrote Black Painted Fingernails?
I was at a stage where, after ten verse-novels in eleven years, I felt I'd said all I could say in that form. My last three books have been prose and I've enjoyed the challenge. Having said that, I used a multiple narrator form in 'black painted fingernails' which I've used before in my verse-novels. I guess I like to tell stories from multiple perspectives... there is no single truth.

Can you tell us a little about James and Sophie from Black Painted Fingernails?
I had lots of fun writing Sophie in particular - a woman who is strong-willed and independent. In many of my previous books, the male character has been to the fore... not in this book. But, most of all, I loved writing the parents - their sense of bewilderment and loss at being left alone as their only child sets off into the world.

What would you like readers to take away from reading Black Painted Fingernails?
That we all carry around our own insecurities, obsessions, feelings of love and loss, ambitions... each day.

Can you describe Black Painted Fingernails in three words?
It's a book! No? Okay...umm, how about - love, loss... landscapes

Can you tell us a little about what inspired you to write it?
I really wanted to write about about the everyday minor details of a young man whose mind and mouth sometimes run ahead of themselves! It's a simple story, I hope, of a man trying to make sense of what being a man really means - how do you respond to love, bullies, friends, school, family - all those crucial little things of being sixteen and a little lost. That's where the title comes from - it's slice of life stuff.

What are you reading now?
For pleasure, I regularly read books about football (soccer) - often on the politics of world football. I've just finished a wonderful book called 'Why England lose' - which attempts to look at football from a scientific and empirical data perspective - sounds boring, but it wasn't. I'm also rereading the first draft of my next book - a verse-novel for children tentatively titled 'Pookie Aleera is not my boyfriend!'

A massive thank you to Steven for taking the time to answer my questions :)

Black Painted Fingernails will be published by Allen and Unwin in June. You can read my review here.

Slice was published by Woolshed Press via Random House in 2010. I haven't read it yet but you can read Nomes' review of it over at her blog inkcrush.

All Steven Herrick titles are available via The Book Depository for those of you outside Australia.