Talk Under Water by Kathryn Lomer 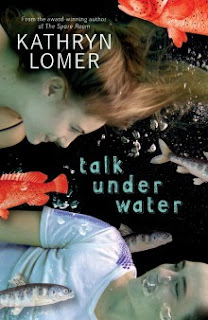 Blurb:
Will and Summer meet online and strike up a friendship based on coincidence. Summer lives in Will's old hometown, Kettering, a small Tasmanian coastal community. Summer isn't telling the whole truth about herself, but figures it doesn't matter if they never see each other in person, right?
When Will returns to Kettering, the two finally meet and Summer can no longer hide her secret – she is deaf. Can Summer and Will find a way to be friends in person even though they speak a completely different language?

In a Nutshell:
Talk Under Water has lovely, refreshing characters was an absolute joy to read, putting a smile on my face and leaving me feeling content and hopeful for the future.

After striking up a conversation via the Facebook fan page of teenage sailor Jessica Watson, Aussie teenagers Will and Summer begin emailing back and forth. It so happens that Summer lives in the small, coastal town of Kettering on the south-east of Tasmania (yep, it’s real), the place Will used to live before his dad decided they would sail up the Australian east-coast after his mum left them.

With a mutual love of sailing, fishing, animals and the outdoors, Will and Summer hit it off, exchanging photos and writing about their lives. At the same time, sick of moving around and missing his old life back in Kettering, Will sets about convincing his depressed dad that it’s time to go home. And then much to Summer’s surprise, Will turns up on her doorstep, but it doesn’t quite go as Will had envisioned.

Having omitted the fact she is Deaf, and also sending a picture of her older sister, Summer is mortified at actually meeting the boy she never expected to chat with beyond email. As she tries to explain, sometimes it's just easier to be someone else. However, Will is hurt by the deception and doesn’t understand how someone he thought was his friend could lie about such a significant fact.

The story is told from alternating perspectives and is also littered with the emails through which Summer and Will often communicate. Every now and then there is a mistake in Summer’s writing, serving as a good reminder that English is actually a second language for her, something I am embarrassed to say I never actually considered before reading Talk Under Water.

I adore the characters of Will and Summer. Summer is this awesome girl who is always up for giving something a go. Her dad died 8 years ago but she always holds on to the valuable life lessons he taught her in the short time they had together. She doesn't see her profound hearing loss as a disability, so why should anyone else? I love Summer’s excitement each time she accomplishes something new and things she thought she might never have the opportunity to try. She doesn’t have any resentment at not being able to hear and doesn’t see herself as disabled, yet she still sometimes battles will how society perceives her as different to the hearing public. I particularly love a scene when Summer is at a music concert and she’s enjoying herself just as much, if not more, than every one else. Will’s description as he watches her move and experience the musical vibrations is perfect.

“Mum says it’s ok to have butterflies anyway, but the trick is to get them flying in formation”

Will isn’t your typical swoony YA boy, but at the same time, he totally is. He’s the nice guy who’s thoughtful and open to new experiences. His upbringing means he’s down to earth and mature from the independence and responsibility he has gained from sailing with his father. His initial reaction to Summer’s hearing loss is to question how on earth they’ll communicate, but he soon realises that there is no reason for it to be a barrier to their friendship. When many people, especially teenage boys, would probably give up on a friendship because it’s ‘too hard’, Will takes it in his stride and secretly starts going to AUSLAN (Australian Sign Language) classes.

“Summer laughs. I haven’t heard her laugh before. It’s an interesting laugh, somewhere between a gurgle and a chortle. A churgle? A gortle?”
I also really enjoyed the underlying dynamic between Summer and her mum, and Will and his dad. All four characters are working through different forms of heartache and I think they all help each other to heal as they realise different things about themselves, and become more open to what new things life throws their way.

It is so wonderful to have a teenage girl with a hearing loss as the main character. One of my best friends grew up with a moderate hearing loss and when I told her about this book, she said she wished there had been a book like it when she was in her early teens. As someone who was always immersed in books, she remembers her surprise and delight when she discovered Gavin, a Deaf character in John Marsden’s Tomorrow Series. She had never found a hearing impaired character, let alone a teenager, in any of her books, despite being widely read. Now an audiologist, she’d appreciate any recommendations of other children’s and YA books featuring a character with a hearing impairment that she can pass on to her young clients. Leave a comment below if any come to mind (we’re already aware of Wonder and Five Flavours of Dumb).

To see a part of your life reflected in popular culture is one of the most precious gifts we can give young people. Many people immerse themselves in books when they feel alone and as a way of coping with the trials of adolescents. We read so we are not alone and for a young adult to be constantly reading stories where there is no hint of a reflection of themselves, it can make growing up that much harder. This is why the We Need Diverse Books campaign is so incredible important, so that the many diverse lives that exist are reflected in young adult literature.

I really, really enjoyed Talk Under Water and highly recommend it. I definitely think it should be available in all schools and libraries as it is such an important story and point of view to share considering 20 000 Aussie children and young adults are estimated to have some form of a hearing impairment (Source). I love that Will helps Summer realise what she is capable of and that she can grab the opportunities in the world with both hands. It has lovely, refreshing characters and was an absolute joy to read, putting a smile on my face and leaving me feeling content and hopeful for the future.

Thank you to the University of Queensland Press for this review copy.
Posted by Jess - The Tales Compendium at 3:03 PM 6 comments: