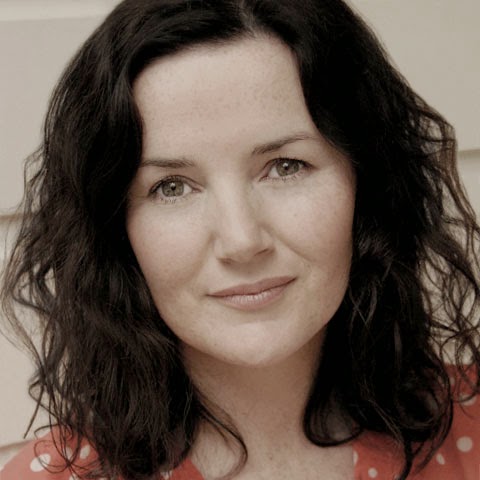 Rachael Craw's debut novel Spark is a compelling and suspenseful book with a likeable, determined heroine, swoon-worthy guys and a mega twist at the end. A decades-old genetic experiment has randomly selected seventeen-year old Evie to be a Shield, tasked with protecting her Spark from a Stray, hell-bent on killing his target. Unfortunately for Evie, her Spark is her best friend Kitty, and the Stray could be anyone.

You can check out my review here but in the meantime, here is your chance to get to know Rachael after I asked her a few left-of-centre questions.


I was the kind of kid who… checked to see if her wardrobe would let her into Narnia. Regular maybe-this-time checks!

My mother always told me… to take my jacket off when I’m inside or I won’t appreciate it when I go out into the cold.

The biggest lesson I learnt at school was… bullies must be confronted. Silence in the face of injustice perpetuates injustice.

I earnt my first pay cheque… selling Liquorice All-Sorts door to door for a Rhythmic Gymnastics fundraising committee. Weirdly, I never did Rhythmic Gymnastics but it made me stacks of cash. I would buy a new record (vinyl album) at the end of each week with my earnings. I was so rich at 13. In retrospect, I cannot believe my parents let me do something so incredibly dangerous! I could have been stuffed into any lunatic’s basement and diced into little bits.

I really hate it when… people are cruel.

The hardest thing I’ve ever done… is write a book and get it published.

I’m frightened of… giving up.

When I’m in the shower I sing… gloriously. (I told you)

My road to publication was… 5.5 years of dreaming, praying, working hard, hoping, learning to receive criticism, applying what I learnt, getting to know my own voice, experimentation, risk, leaps of faith, revision, listening, believing, digging deep, surviving earthquakes, pressing in, taking advice, being thankful, having my eyes opened, counting my blessings, wearing my heart on my sleeve, joy, tears and more prayers…

The last book I read was… Cloud Riders by my Twitter buddy, Nick Cook. A high octane, high altitude, steampunk adventure story about airships that travel dimensions through twisters!

I would love to meet… Peter Jackson (he signed my t-shirt at the Lord of the Rings Return of the King World Premier in Wellington, NZ but that doesn’t count. I want to sit down and have a cuppa and chat).

When I get the munchies I eat… Nelson’s own ‘Proper Crisps’ Best potato chips in the whole world.

I’m currently working on… Book 2 of the trilogy, Stray. 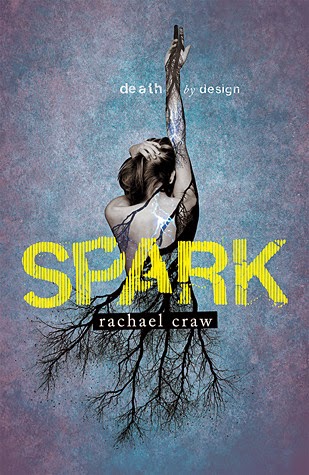 Blurb:
Evie doesn’t have a choice.

One day she’s an ordinary seventeen year old, grieving for her mother. The next, she’s a Shield, the result of a decades-old experiment gone wrong, bound by DNA to defend her best friend from an unknown killer.

The threat could come at home, at school, anywhere. All Evie knows is that it will be a fight to the death.

And then there’s Jamie. Irresistible. Off-limits

Spark is a compelling and suspenseful debut with a likeable, determined heroine, swoon-worthy guys and a mega twist at the end.

I really enjoyed Spark. In fact, I found it so compelling that I stayed up until 2am to finish it. I really shouldn’t start books just before bed...


Evie’s had a tough six months and after the death of her mother, she moves from Pennsylvania to live with her aunt and braces herself for her new high school. Unfortunately she won’t be at the same school as her childhood friend Kitty who has moved back to New Hampshire from London to attend the prestigious Gainsborough Collegiate. However, both girls’ futures become uncertain when Evie discovers she is a Shield, a protector of those who are targeted by Strays (DNA-controlled killers), and is destined to protect Kitty at all costs.

Shields and Strays are the result of a secret synthetic gene experiment originally developed two generations ago that went wrong, and are now passed down randomly through the genetic line. For Evie, all aspects of her life change and she has to learn to adjust to the fact she has a pre-determined future and will never be a ‘normal’ teenager. With her body evolving in response to the mutated gene, she experiences enhanced speed and strength and battles with the consequences of being separated from Kitty, who she has ‘sparked’ with.

I found it a bit confusing when Evie’s situation was explained to her, trying to keep track and wrap my head around the acronyms and reasons for the mutation. However you experience the confusion as Evie does and it becomes clearer as she learns more. While it is a relief that Evie now understands why she has been experiencing strange dreams, hallucinations, heart palpitations and dizziness, as well as the odd feelings towards her friend, it doesn’t make them any easier to deal with. Being an outsider is never easy, but for Evie, fitting into Kitty’s upper-class life will be even harder, especially when her protective instincts kick into overdrive with Kitty’s social life. And if things weren’t difficult enough, the reappearance of Kitty’s brother Jamie complicates Evie’s life once again.

As many of you know, contemporary novels are my thing, favouring them over sci-fi/fantasy/supernatural. However, Spark’s sci-fi element didn’t bother me as the characters live in the real world and are battling the same everyday dramas of teen life: fitting in, not embarrassing themselves, having a crush, etc. These problems just get mixed in with a few more complications, like a killer stalker on the loose.

Spark is a compelling and suspenseful debut with a likeable, determined heroine, swoon-worthy guys and a mega twist at the end.

And how awesome is that cover?!

@RachaelCraw | RachaelCraw.com
Posted by Jess - The Tales Compendium at 9:09 AM No comments:

Every Word by Ellie Marney 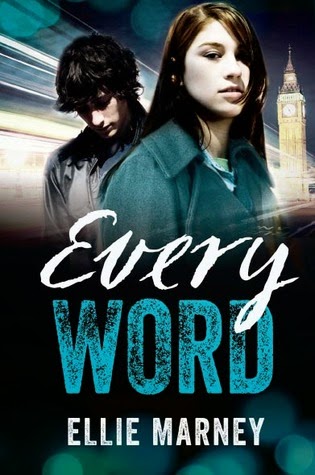 Blurb:
James Mycroft has just left for London to investigate a car accident similar to the one that killed his parents seven years ago...without saying goodbye to Rachel Watts, his 'partner in crime'.

Rachel is furious and worried about his strange behaviour - not that Mycroft's ever exactly normal, but London is the scene of so many of his nightmares. So Rachel jumps on a plane to follow him...and lands straight in a whole storm of trouble.

The theft of a copy of Shakespeare's First Folio, the possible murder of a rare books conservator, and the deaths of Mycroft's parents...Can Watts help Mycroft make sense of the three events - or will she lose him forever?

Sparks fly when Watts and Mycroft reunite in this second sophisticated thriller about the teen sleuthing duo.

In A Nutshell:
Loved it! Bring on book three!

My Review:
Every Word is Ellie Marney’s follow up to last year’s brilliant debut, Every Breath. After disappearing in the middle of the night without so much as a goodbye, Mycroft travels to London to assist his boss with an autopsy of an Australian car-crash victim. To the police, the case seems open and shut, with a confession from the victim’s girlfriend. However, Mycroft is convinced there is more to the story, with a possible connection to the robbery of a historical book at the victim’s workplace a few days earlier. The crash is also eerily similar to the accident that claimed the life of his parents seven years ago. Unfortunately, without evidence, Mycroft is having a hard time proving his theory, let alone finding the answers to his parents’ death.

It was never going to be easy for Mycroft to return to London and he is less than impressed when Rachel shows up at his hotel, preferring to keep her away as his life falls apart once again. Searching for the answers he has craved for the past seven years, and with so much at stake, emotions are running high and his behaviour becomes more unpredictable than usual. But his attempts to push Rachel away are futile and he slowly accepts that she isn’t just going to leave him to deal with his traumatic history alone.

Mycroft may claim Rachel is a genius but she’s still a little naïve when it comes to trusting strangers, despite what happened at the zoo in Every Breath. While Mycroft is busy with the police, she heads off on her own to discover more about the victim. Unfortunately she finds herself getting kidnapped when she gets a little too close to uncovering some answers. She puts up a damn good fight though!

While Mycroft will do anything to keep Rachel safe, his quest for answers means his concerns for personal safety do not extend to himself. Put these together and Mycroft and Rachel find themselves in more danger than they ever thought possible, receiving multiple beatings and broken bones when they inadvertently become mixed up with ruthless contract killers.

Every Word leaves us with ‘Moriarty’(Sherlock’s nemesis for those of you who are not familiar with the original stories) making an ‘appearance’ and a new piece of information to add to the mystery about what really happened to Mycroft’s parents, taking them one step closer to finding the truth.

There is so much more to this series than the dalliances with Sherlock Holmes mythology. There is action, mystery and intrigue, the usual teenage dramas, family dynamics (oh how I love the relationship between Rachel and her brother Mike), and yes, romance. Mycroft’s erratic behaviour would drive me crazy but he still makes me swoon and Ellie really knows how to write smoking hot make-out scenes!

I loved Every Word and found it hard to stop skipping ahead to see what was going to happen. I didn’t want to put it down and even though I loved Every Breath, Every Word has surpassed it. I can’t wait for Every Move which will be released March 2015.

Thank you to Allen & Unwin for this review copy.

For other stops on the Every Word Blog Tour, check out Ellie’s tour post.
Posted by Jess - The Tales Compendium at 8:30 AM 2 comments: