Every Breath by Ellie Marney 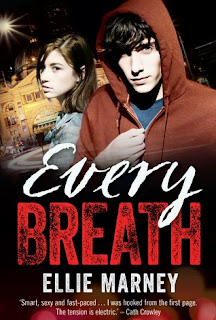 Rachel Watts is an unwilling new arrival to Melbourne from the country. James Mycroft is her neighbour, an intriguingly troubled seventeen-year-old genius with a passion for forensics. Despite her misgivings, Rachel finds herself unable to resist Mycroft when he wants her help investigating a murder. And when Watts and Mycroft follow a trail to the cold-blooded killer, they find themselves in the lion's den - literally.

A night at the zoo will never have quite the same meaning again...

In A Nutshell:
A mystery set in Melbourne with quirky and likeable characters makes this teenage detective story, containing elements of Sherlock Holmes, the perfect way to spend your afternoon.

My Review:
I've always been a fan of crime and detective stories. Currently I'm loving the Sherlock Holmes TV adaptation Elementary and so I was excited to discover Every Breath, the debut novel by Australian Ellie Marney. Like Elementary, Marney explores the dynamics between the Sherlock-esq character and his sidekick by making Watson/Watts, female. I would also like to make a point of reminding those of you who are judgemental, that books take years to write and Marney would have decided on Watts being female long before Elementary found its way to the TV screen. Every Breath brings many of the famous Sherlock Holmes quirks back to life and wraps them up in the teenage bodies of James Mycroft and Rachel Watts. For those of you not in the know, Mycroft is the name Arthur Conan Doyle gave Sherlock's brother in his famous novels. Fans will delight in the various references and similarities found throughout the pages but they by no means dictate the story.

Seventeen-year-old James Mycroft has many of the same quirky and irritating habits as Sherlock Holmes, something that is not lost on either Mycroft or Rachel by their frequent jokes about how their names and passions reflect the famous fictional duo. Mycroft has had a devastating childhood, one that fuels his desire for knowledge and solving puzzles, and that has contributed to his eccentric and borderline criminal behaviour. Rachel Watts is a country kid whose family has moved to Melbourne due to their farm suffering massive financial strain. Rachel finds it difficult to find her place in the city where life is very different to the one she has known for the past seventeen years. I really felt for Rachel as she adjusted to life in Melbourne and the parts where she reminisces about her old life and the pain she and her family went through was often quite sad to read. Their individual back stories and the constant inclusion of Rachel's family helped build them into their own characters so it didn't feel like we were just reading about younger versions of Sherlock Holmes and Doctor Watson.

We first meet Rachel and Mycroft as Rachel attempts to provide first aid to Mycroft, a nod to the medical aspect of Dr Watson. The two later discover the death of their homeless friend Dave and set about solving it, something the police do not see as foul play. Rachel and Mycroft find themselves in all sorts of situations and trouble during their quest for answers but what I was most looking forward to was the explosion of their attraction to each other which simmers away throughout the book until a point where we are finally (OMG) rewarded (that's not really a spoiler, you can tell it is eventually going to happen!).

I will admit that it did take me a good portion of the first third of the book to really get into it however that could just be because it was the first book I had read in 3 months and once I got into the swing of things, I couldn't put it down. I would definitely re-read it in the future and am super excited to hear there will be more Mycroft and Watts stories coming soon with Every Word and Every Move in 2014!

For something similar, try Girl Defective or A Pocketful of Eyes.
Posted by Jess - The Tales Compendium at 3:50 PM