This year I attended the 10th biennial Reading Matters Conference in Melbourne, hosted by the Centre for Youth Literature. This was no cheap or easy feat as I flew over from Perth for the weekend at the pointy end of my uni semester. But it was well worth it and I wanted to share the experience with you all. Unfortunately this post has been sitting in my 'drafts' folder since June, long forgotten when uni got hectic, much like the blog, which has suffered this year due to my increasing work load. So even though it is six months late, I do still want a record of the amazing time I had so here is a little recap of the 2013 Reading Matters Conference. 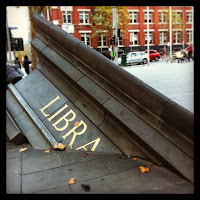 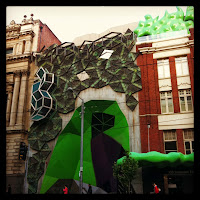 Reception
Thursday 30th May 2013
The conference kicked off with a reception at the State Library of Victoria where all the conference guests could mingle with each other and the visiting authors. I ran into some lovely librarians from Perth and various other book industry people. I then spied blogger Danielle of ALPHA Reader and Adele from Persnickety Snark, who also now happens to be the Program Coordinator at the Centre for Youth Literature! Adele then made a point of introducing me to all the lovely authors, which was insanely intimidating (but VERY much appreciated) because, hello, YA royalty! I met Gayle Forman, Libba Bray, Myke Bartlett, Vikki Wakefield (who I met earlier in the year at PWF), Fiona Wood, Emily Gale and Leanne Hall and everyone was so lovely to meet and chat to, and many knew me via my blog which was so flattering!

You can check out Danielle's recap of the reception here.

Conference Day 1
Friday 31st May 2013
The first panel of the day was chaired by Adele and titled Action! with Gayle Forman, Tim Sinclair and Raina Telgemeier discussing writing about teen experiences. When asked why they choose to write about teens, Tim said because grown ups are boring (agreed!) and Gayle said it's about reliving the teen years and making them better. Raina commented that kids are the same no matter where they are from, they all have hopes and dreams and when Adele asked if YA is a genre or a readership, Tim replied, "it's awesome", much to the agreement of everyone in the room!

Some other snippets from the session:
At question time, the authors were asked what their next projects were. Gayle is working on a suicide/mystery/love story tentatively titled A Code Unknown (now recently announced as I Was Here). Tim is working on "an actual book" as opposed to a verse novel and Raina has a companion to Smile, (which sold out at the conference bookstore within the first half hour of the 2 day conference!) called Sisters, which will be released in 2014. Gayle also told us that the If I Stay film was starting to come together with a new director (RJ Cuter) and that they were in the final discussions as to who would play Mia. As we all now know, If I Stay is currently filming with the amazing Chloe Grace Moretz cast as Mia and will be released sometime in 2014.

Next was a segment called Graphics Alive in which illustrator Sarah Howell did an exercise on drawing emotions. She wrote different emotions on  a piece of paper and then asked us what our facial features did and then drew them. She also showed us how Grimace works, a blending emotions simulator. 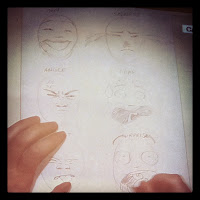 The second panel of the day was chaired by Jordi Kerr from the Centre for Youth Literature and was titled Is there an app for that? It featured Fiona Wood, John Flanagan and Paul Callaghan and discussed "stories and communities in a brave new world". I was busy listening and forgot to take notes but I did scribble down a couple of things Fiona said, such as "I write a book I'd love to read". When talking about her new novel Wildlife (a companion to her debut Six Impossible Things), Fiona said she felt Lou and Fred didn't have enough page time in Six Impossible Things and her Wildlife protagonist, Sibylla, needed a friend like Lou. I also took this picture of John checking out photos of the LARP (Live Action Role Play) of his series Ranger's Apprentice...

The big surprise of the day, possibly the whole conference, was a talk by UK author Keith Gray called Gatekeepers - the good, the bad and my mother. Keith was a fantastic speaker and really hit the nail on the head when it came to discussing people stopping kids and young adults from reading certain books.

A few golden nuggets from Keith:
Keith's speech in full can be found on the Centre for Youth Literature's website and I highly recommend it.

By this point I had pretty much given up trying to take notes as I was too busy listening to each of the speakers. The afternoon featured the Everyone's a critic session with Myke Bartlett, Alison Croggon and Morris Gleitzman, and Challenge accepted with Ambelin Kwaymullina, Andrew McGahan and Garth Nix.

The final session of the day, You can't say that! was with Libba Bray, Vikki Wakefield and Gabrielle Williams. I managed to scribble down that Libba said in the US, censorship is more about language than sex or violence. And Gabrielle told us how her US publishers wanted to replace the character of Jesus in her novel The Reluctant Hallelujah, with Elvis.

And what's next for Vikki, Libba and Gabrielle? Vikki is working on a love story with a dual point of view. Libba is working on the sequel to The Diviners with all new evil and 1920's avengers. And Gabrielle is writing a novel set in 1986 with four characters, two who are 17 and two who are 23. There is crime, intrigue and romance.

There were many more amazing quotes but I just couldn't get them down fast enough and listen at the same time! Danielle was far more efficient than me and has written a tremendous recap of all the Day One talks in full detail, making you feel like you were sitting there next to us. Check out Danielle's post over at ALPHA Reader.

Day Two started with Raina Telgemeier discussing My life in comics. Raina retold how her comic career began and evolved and shared with us the long process it takes to create her comics. She talked about what inspired her to create Smile and Drama and then did a little illustration for us on the projector. As well as creating Sisters, the sequel to Smile, Raina continues to turn the classic Babysitters Club stories into graphic novels.


Zac over at My Best Friends are Books has done a great recap of this session here.

What's yours is mine was second on the bill for the day with Alison Croggon, Andrew McGahan and Gabrielle Williams exploring "creation through adaptation". Gabrielle discussed how the structure of The Reluctant Hallelujah was influenced by The Wizard of Oz, with each of her characters with resembling characteristics. For those who have read it, Dodie - Dorothy, Coco - Toto, Enron - Scarecrow, Jones - Tinman, and Taxi - Lion.

"Sometime you can go on an adventure that isn't about you, it's bigger than yourself" - Gabrielle Williams

See Danielle's post for further info on this session.

Myke Bartlett, Fiona Wood and Libba Bray were up next to discuss gender and identity in YA with Jordi Kerr. This was quite a highly-charged session with panel members and the audience getting riled up about the constant 'distinction' between girl books and boy books, who will read them, who won't, and the marketing ploys of publishing houses to appeal to who they think will be the most likely readers.

I'm sure you have all noticed the increase in the number of YA novels with headless girls wearing beautiful dresses (here is a post I recently found that places a bunch of these side-by-side) on covers and I am reminded of a talk I saw last year with Melina Marchetta who said she was very opinionated as to how the cover of Quintana of Charyn was to look. The character is not some pretty, magical looking girl and she didn't want the cover to resemble another 'made-up girl' floating through a forest or beach or whatever (ok, I'm paraphrasing here, but that is essentially what she said) and not reflect the character in any way. When I worked in the book store, it would make me so mad when parents wouldn't buy a excellent book I recommended just because they didn't think their son would read the book because it had a female protagonist, or a girl on the cover, or god-forbid, the author was female! It was/is so utterly frustrating. The Maureen Johnson Coverflip Experiment was brought up during the session and if you haven't heard of it, check it out.

For a play-by-play recap of this session, check out Danielle's detailed post here.

Next up was I sing the body electric with Paul Callaghan, and then Outsider, outside with Garth Nix, Tim Sinclair and Vikki Wakefield. By this stage I had completely given up taking notes so please stop by Zac's post or Danielle's post to see what these fantastic people had to say.

The Inky long list was announced in the afternoon which is an annual teen literature award run by Inside A Dog, the Centre for Youth Literature's website, and winners are voted for online by the readers of the website. The nominees are listed below, with the winner for each highlighted in green as they were announced a couple of weeks ago.


To finish the conference, Gayle Forman, Morris Gleitzman and Keith Gray where guests for the Unleashing YA panel. Zac has a great recap of this session over at My Best Friends are Books which I recommend checking out and Danielle once again has this session covered in her Day Two post.

This was my first Reading Matters Conference and I had such a wonderful time and met so many great people. It was definitly a highlight of my year and I look forward to the 2015 conference. Big shout out to the Centre for Youth Literature crew for putting together such a terrific program and for all their hard work leading up to and over the conference weekend. You guys rock! x

I was lucky enough to also be invited by Gayle to hangout with her, Annette and Rachel, fellow bloggers who run Looking on the Side of Wonder. The day after the conference finished, we met Gayle at her hotel and then walked through Carlton Gardens to Brunswick Street where we did some window shopping and grabbed lunch. 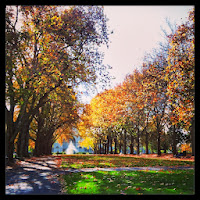 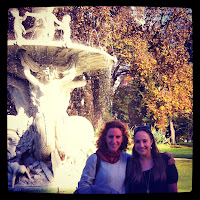 I hope everyone checked out the #yamatters tag on Twitter because there were some truly awesome quotes put up over the weekend (in particular on the 31st May and 1st June) and the hashtag is ongoing so keep an eye out.
Posted by Jess - The Tales Compendium at 10:42 AM