Holier Than Thou by Laura Buzo 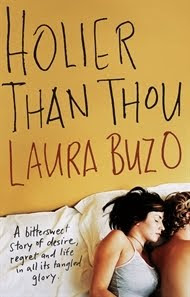 Blurb:
Holly Yarkov has a boyfriend who is a gift from the universe. She has a job that fulfils her even as it wears her down. She has a core group of friends from high school. And she has a layer of steel around her heart that is beginning to tarnish. Just as she is reaching for a future she can't quite see, Holly is borne back into the past by memories of her beloved father, and of the boy-who-might-have-been...

Grief and longing run like veins of quicksilver through this beautiful novel, at once gloriously funny and achingly sad.

In A Nutshell:
I absolutely loved Laura Buzo’s second novel. I could honestly have read about Holly’s life forever as we delved into the pitfalls of her relationships throughout high school, university and the beginning of adulthood, with all the responsibilities that come with growing up.

My Review:
Slight Spoilers Ahead..

Holier Than Thou is a wonderful coming-of-age story of the new-adult vibe. It chronicles the life of Holly Yarkov from her time in high school through to the year after she graduates from university. It jumps back and forth between these time periods, which was confusing at times but once I worked it out, it was smooth sailing.

Perhaps the most emotive part of the novel is Holly’s father’s battle with cancer and his subsequent death. The situation is not sugar coated and is told in stark reality as his condition declines and Holly takes the supportive role, helping her mother and administering medication, while protecting her younger brother. Holly, who was always closer with her dad, buries her grief from those around her and acts as the stoic pillar of the family, something that will come back in later years to haunt her.

Holly has a very close-knit group of friends but over the years she has to face the fact that people change. They are often influenced by new people or new jobs, their ideals can change, and friendships grow apart, they become different people to those you first felt a connection with back in high school and the realisation that the friendship is dying can be heartbreaking. One of my favourite aspects of Holly’s small friendship group of Lara, Abigail, Daniel and Liam is that they were so very close, with their cute nicknames and the illusion that they were ‘living the dream’ together. Their summer after high school actually reminded me of my own after finishing year twelve. It was so much fun but like Holly’s, it didn’t last forever.

Liam was a tremendous support to Holly throughout her father’s rapid decline. The beginning of their friendship was painfully slow but gradually they grew to be the best of friends. Unfortunately for Holly, she also had a major crush on him which festered for many years, finally culminating in an awkward drunk evening in which they both had the opportunity to tell the other how they felt, but didn’t. Because of this, they drifted apart to the point where two people who used to be as close as imaginable, no longer spoke. This is something that Holly couldn’t deal with and Liam is a pivotal character throughout the book. One of the hardest things in life is watching someone you love, love someone else, and Holly has to face this throughout most of the story. I think this aspect is something a lot of people can relate to. She never did anything about it and then in an instant, it was too late.

In the present day, Tim is Holly’s boyfriend and the two of them have just moved out of home, now that they have ‘real’ jobs. At first they are super excited about moving out and the freedom that comes with it, even the fact they will be practically broke is not enough to sway their excitement. This however, like many cases, does not last, and the reality of working full time and being exhausted soon takes its toll on the couple and the ‘honeymoon period’ ends. Holly works as a social worker and is the type of person who always puts immense pressure on herself to succeed and prides herself on her stances on human rights and taking the moral high ground, hence her nickname, Holier-than-thou. So when Nick becomes part of the picture, there shouldn’t be any moral dilemmas for Holly to tackle, right?

Nick is Holly’s partner at work. He has dreadlocks and likes to learn circus tricks, his current obsession being fire twirling. He is many things that Tim is not and he and Holly have a very good working relationship, fun and light-hearted with nicknames and a relatable understanding that can only come with working together.

I absolutely loved Laura Buzo’s second novel. I could honestly have read about Holly’s life forever as we delved into the pitfalls of her relationships throughout high school, university and the beginning of adulthood, with all the responsibilities that come with growing up. I can understand while some people found Holly annoying but I found her to be very realistic and the novel outlines many of the trials and tribulations new adults go through. There are so many books about high school, but not many that look at what happens afterwards. I also loved having an older protagonist, even if it was only for half the book when Holly hits her twenties.

Also by Laura Buzo:Good Oil
Posted by Jess - The Tales Compendium at 9:56 AM 1 comment:

Today, the Children's Book Council of Australia announced their Book of the Year award winners for 2012.

I am super excited to say that the winner in the Older Readers category was Scot Gardner for
The Dead I Know! 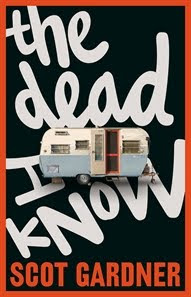 I gave The Dead I Know 4/5 and said,
"I loved The Dead I Know. It was suspenseful, heart-breaking, touching and hopeful."
You can check out my full review here.

The honour books were A Straight Line to my Heart by Bill Condon (read my review here) and When We Were Two by Robert Newton.

To view the winners in the other categories, click here.
Posted by Jess - The Tales Compendium at 6:03 PM No comments: 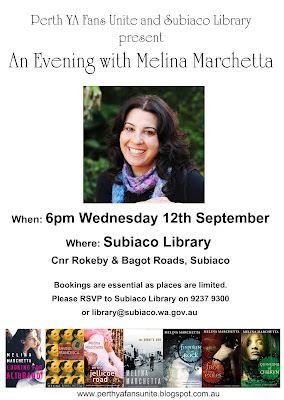 For more information visit the Perth YA Fans Unite website.
Posted by Jess - The Tales Compendium at 9:28 PM No comments: 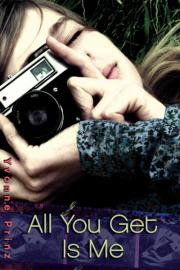 Title: All You Get Is MeAuthor: Yvonne PrinzRelease Date: 21st December 2010My Rating: 3/5
Blurb:Things were complicated enough for Roar, even before her father decided to yank her out of the city and go organic. Suddenly, she’s a farm girl, albeit a reluctant one, selling figs at the farmers’ market and developing her photographs in a ramshackle shed. Caught between a troublemaking sidekick named Storm, a brooding, easy-on-the-eyes L.A. boy, and a father on a human rights crusade that challenges the fabric of the farm community, Roar is going to have to tackle it all—even with dirt under her fingernails and her hair pulled back with a rubber band meant for asparagus.In A Nutshell:A pleasant tale to while away an afternoon with as Roar experiences a summer unlike any other.My Review: Roar is ready for her summer break. She’s looking forward to sleeping in, hanging out with her best friend Storm and taking copious amount of photographs. But life isn’t that easy and despite the agreement Roar brokered with her father when he decided to move them out to a farm, she is roped into helping out with all the chores around the farm, which includes 4am starts.On their way to their farmers market stall one morning, Roar and her dad witness a head on crash between a rich, real estate developer and an illegal Mexican worker, leaving the worker dead. Roar’s dad, an ex-human rights lawyer, doesn’t want to see the death swept under the rug and so sets out to fight for the rights of illegal workers. Things get complicated for Roar when she meets Forest, the son of the developer who was driving the car, and is instantly drawn to him. As their relationship blossoms in secret, her father continues to aggravate locals with his views on workers’ rights, causing friction and trouble not only for Roar and her dad, but their farm workers as well. This is a coming-of-age novel that documents an unforgettable summer for Roar in the lead up to her sixteenth birthday as she tries to balance farming life with boys, an out of control bestie, the resurfacing of the mother who abandoned her, and threats against her father and the farm.My favourite parts of the story were the ‘family’ dinners Roar and her dad have with their friends and workers, Roar’s passion for photography (not the digital kind!) and the simple moments she shares with Forest.A pleasant read to while away an afternoon.
Posted by Jess - The Tales Compendium at 7:11 PM 1 comment:

Labels: 3/5, All You Get Is Me, review, Stories about first love, Stories about human rights, Yvonne Prinz
Newer Posts Older Posts Home
Subscribe to: Posts (Atom)