A Straight Line to My Heart by Bill Condon 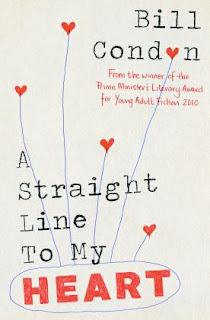 Title: A Straight Line to My Heart
Author: Bill Condon


Blurb:
School is over, not just for the year, but forever. Tiff and Kayla are free, which is what they've always wanted, but now summer is nearly at and end and that means life decisions. Tiff is hoping her job at the local paper will lead to something more... But 'The Shark' soon puts her straight on what it takes to become a hard-nosed reporter like him.

At home, Reggie - the only grandad she's ever known - has quit the smokes and diagnosed himself as cactus. Then Kayla hits her with some big news. And into all this stumbles Davey, the first boy who has ever really wanted to know her.

Tiff is smart with words and rarely does tears, but in one short week she discovers that words don't always get you there; they don't let you say all the stuff from deep in your heart.

In A Nutshell:
A great new Aussie contemporary read that looks at what happens when you are faced with the fact that everything in your life might change and how you cope when there is nothing you can do to stop it. A fabulous story of growing up and going with the flow.

My Review:
You know how some books just make you feel at home? Aussie books such as Feeling Sorry for Celia, Guitar Highway Rose, Swerve, Graffiti Moon and Six Impossible Things evoke a feeling of comfort for me and Bill Condon’s latest release has now joined this list.

The story focuses around Tiff, who has just finished high school and lives in the small country town of Gungee Creek (a fictional Australian town that is described so well, I felt like I was sitting right there next to Tiff and Kayla, watching the Gungee Gunners lose the footy). Aside from knowing she wants to be a journalist, everything else in Tiff’s life is a bit uncertain. It’s the uncertainty of the future; growing up, friendships changing, moving away from home, the awkwardness of a potential boyfriend, family illnesses, the confusion of finishing school and expecting to know what you want to do for the rest of your life (in the case of Tiff’s best friend Kayla). And then Tiff starts to have doubts about wanting to be a reporter…

I think my favourite aspect of A Straight Line to My Heart is the character of Tiff. She’s a bit of a loner, somewhat quirky and a bit awkward, and she doesn’t always say the right thing. She’s very real. Tiff lives with grandpa-figure Reggie, a local legend and die-hard footy fan, lover of the Beatles and John Wayne movies, and Bull, part father figure, part big brother. While the three of them are not actually related (Tiff’s mother died when she was a baby and Tiff was taken in by Nell, Reggie’s wife and Bull’s mother), they have a comfortable and loving life. Most of the story skirts around the outside of what may happen when this little family unit will have to change with the natural progression of life, until the decision is made for them. I also love how Tiff’s love interest Davey is completely different from what you would find in many other YA male characters. While he doesn’t make me swoon, he is sweet and tries very hard and I think that is exactly what Tiff needs.

A Straight Line to My Heart was a quick read but by no means insignificant. It’s realistic and down-to-earth and reminded me a bit of The Big Crunch which I gushed over last year. A wonderful addition to the Aussie contemporary scene.


“There’s nothing quite as good as folding up into a book and shutting the world outside. If I pick the right one I can be beautiful, or fall in love, or live happily ever after. Maybe even all three. If you can’t get a boy, get a book, that’s my motto.”


Thankyou to Allen & Unwin for this review copy.
Posted by Jess - The Tales Compendium at 9:41 AM