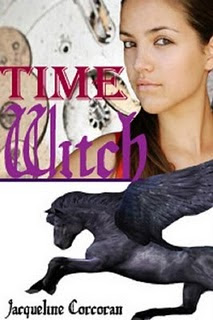 
Blurb: Twelve year old Genevieve, in search of her missing single-parent mother, finds her way to another world where competing dynasties of witches battle, as time ticks backward, for control over a magical clock and a winged horse as part of an ancient prophecy. Genevieve discovers that she is the niece of the Snow Queen on whose island Genevieve is initiated into magic.


My Review:
Time Witch is the story of 12-year-old Genevieve who, while searching for her mother (who has mysteriously disappeared), discovers that the magical world she made up with her best friend, is actually real. Mistakenly she enters the fantasy realm and comes face to face with flying horses, treasure hunting trolls, the evil witch Duvessa and her terrifying hawk. Here she joins forces with snooty princess Ciera and the dashing prince Rowan to find the three missing pieces of a magical crystal clock and get them to the last remaining rose witch, The Snow Queen, before Witch Duvessa can lay her hands on it and make time disappear forever.

The magical realm that Genevieve creates is based on fairy tales she has read, the sparkling rocks at the Natural History Museum in Washington DC (where she lives), and the classic troll dolls with funky hair. This is the kind of story-world I would have created when I was younger.

Overall it was an enjoyable read and is perfect for ages 9-13 who love fantasy worlds with magic and daring adventures. For fans of The Chronicles of Narnia.

Time Witch is available as an ebook from eBookwise, Solstice Publishing and Amazon.
Posted by Jess - The Tales Compendium at 8:50 AM