The Warlock by Michael Scott 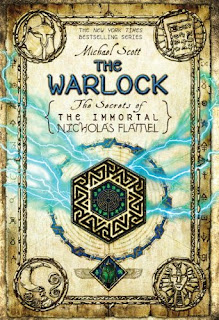 In the last four books we have discovered that Sophie and Josh Newman, two ordinary fifteen-year-olds from San Francisco, are actually the twins of legend, prophecised to save or destroy the world. As Nicholas and Perenelle Flamel take them from America, to France, England and various shadow-realms searching for those who can awaken the twins and train them in the four elements, they are also in a race against time to stop Doctor John Dee, magician, necromancer and all-round bad guy from using the stolen Codex to bring destruction to the world.

***Do not read ahead if you have not read book four, The Necromancer***
Blurb:
The Newman twins have finally been divided. The end is near.

In San Francisco, Josh has chosen a side - and he will not stand with his sister, Sophie, or the Alchemyst, Nicholas Flamel. He has chosen to fight along side John Dee and the mysterious Virginia Dare. Sophie will do anything she can to find her brother, but her training must continue. Earth Magic is next; with Perenelle and Nicholas as weak as they are, Niten must help her to find her instructor. Someone Sophie already knows very well…

In A Nutshell:
Fans will not be disappointed as favourites are put in danger, magic is tested, Dee creates mayhem and lives are risked. Connections between characters become known and a shock-inducing cliff-hanger will leave you speechless.

My Review:
The Warlock, the fifth book in Michael Scott's six-book series, picks up right where The Necromancer left off with Sophie and Josh choosing separate sides, Sophie with the Flamels and Josh with John Dee and Virginia Dare. As both groups flee Dee's crumbling 'Enoch Enterprises' building after Coatlicue is sent back to her shadow-realm with Aoife sacrificing herself, Sophie and Josh struggle with the others' betrayal, as each twin believes they are on the right side.

Every chapter switches back and forth between a whole host of different characters as they all prepare to come together for the explosive final book The Enchantress, due mid 2012. Josh, Dee and Virginia Dare head for Alcatraz where Machiavelli and Billy the Kid are waiting to release the cells of monsters onto an unsuspecting city of San Francisco. Sophie and Niten set off to find Tsagaglalal, She Who Watches, while the extremely weakened Prometheus escapes his crumbling shadow-realm with an exhausted Perenelle, and Nicholas, who is near death.

Scatty, Joan, Saint Germain, Palamedes and Shakespeare have travelled back in time with the mysterious hook-handed man to destroy the lost city of Danu Talis. Characters such as Prometheus and Tsagaglalal who are with Sophie in present time, are also featured on Danu Talis with Scatty and the others since they were there when it was destroyed. Once you get your head around the time warp, it can actually get quite funny, especially when they run into Prometheus who has no idea who they all are (and Scatty is his niece!).

There are also appearances from Gilgamesh, Black Hawk, Mars Ultor, the Witch of Endor, mysterious Elders Isis and Osiris, the Old Man of the Sea, Elders Hel and Odin and Codex creator Abraham the Mage. Many of them, despite their centuries old rivalries, come together with Sophie, Perenelle, Tsagaglalal, Niten and Prometheus to try and stop Dee, their common enemy.

Fans will not be disappointed as favourites are put in danger, magic is tested, Dee creates mayhem and lives are risked. Josh remains suspicious of Dee's motives but Sophie also begins to questions Perenelle's actions when she becomes reckless. As the fifth book progresses, a lot of connections are made between characters who have appeared throughout the series, some that will make you sit back and go, 'ohhhhhhh.'

And the ending? OMG what an ending! But what, how?! I knew something like this was coming...but not THIS! The shock-inducing cliff-hanger opens up so many new questions that will leave your mind reeling and absolutely desperate for the sixth and final book. I can already tell, it is going to be AMAZING!

I've stuck with this series now for four years and I really am quite desperate to read the final book, especially now, since The Warlock finished on the biggest cliff-hanger possible. A whole year! Seriously?! Maybe Michael Scott, to say thank you to all your loyal fans, you could release The Enchantress much earlier? Say like in six months time? That would be really great. Thanks.... I can dream right?!

A big thank you to Random House Australia for providing me with a review copy.

Posted by Jess - The Tales Compendium at 9:57 AM

Labels: 4/5, magic, Michael Scott, mythology, review, Stories about history, The Alchemyst, The Magician, The Necromancer, The Secrets of the Immortal Nicholas Flamel, The Sorceress, The Warlock