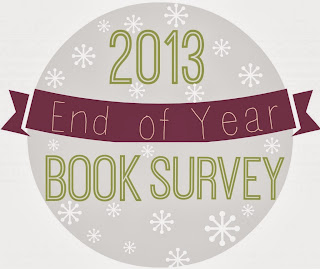 Once again, Jamie over at The Perpetual Page-Turner is hosting her annual End of Year Book Survey. Click this link to read all about it, get the full list of survey questions, and link up your name to the list of other participants.

1. Best Book You Read In 2013? (If you have to cheat — you can break it down by genre if you want or 2013 release vs. backlist)
I’m going to cheat and make it a four-way tie because all four were amazing for different reasons and had an impact on me. Friday Brown by Vikki Wakefield, Just One Day by Gayle Forman, Life in Outer Space by Melissa Keil and Zac and Mia by AJ Betts

2. Book You Were Excited About & Thought You Were Going To Love More But Didn’t?
Eleanor and Park by Rainbow Rowell. Everyone raved about it and it has been voted in a number of polls as the best YA Contemporary book of 2013 but it just didn’t do it for me. I don’t know why, I really wanted to love it. It’s not that I didn’t like it, it’s just that I finished it and had nothing to say about it, it didn't have any impact on me, hence why I never wrote a review about it. I’ve only discovered one other person who felt the same way and she has encouraged me to try another novel by Rainbow Rowell so that is my goal for 2014.

3. Most surprising (in a good way!) book of 2013?
Girl Defective by Simmone Howell. I read Everything Beautiful a few years back and didn’t like it so I was nervous about reading Girl Defective. I needed not worry. I guess some books speak to you, others don’t and it isn’t necessarily a reflection of the author’s abilities. Girl Defective ended up being one of my favourite novels of 2013.

4. Book you read in 2013 that you recommended to people most in 2013?
Friday Brown by Vikki Wakefield and Life in Outer Space by Melissa Keil

5. Best series you discovered in 2013?
I’m actually not a fan of series as I get frustrated having to wait for the follow-ups. Plus, series are mostly associated with fantasy/sci-fi/supernatural stories and I usually prefer contemporary. That said, I really enjoyed Every Breath by Ellie Marney and I have heard there will be future stories featuring the same characters so I will  make that my ‘series’ pick.

6. Favourite new author you discovered in 2013?
Melissa Keil. I absolutely loved Life in Outer Space and I am totally hanging out for her second novel Cinnamon Girl due for release in 2014.

7. Best book that was out of your comfort zone or was a new genre for you?
I was pleasantly surprised by The Mimosa Tree which is written by West Australian author Antonella Preto. Set 26 years ago in 1987, I generally prefer stories set in the present day but the novel was refreshing with relatable situations for teens.

9. Book You Read In 2013 That You Are Most Likely To Re-Read Next Year?
I rarely have time to re-read and with a sky-high TBR pile, re-reading is not a priority for me. However, I do plan or re-reading Divergent before the film comes out and also Daughter of Smoke and Bone before the final book is released (OK I cheated since I didn’t read any of them during 2013). If I need cheering up at some point I’d be most likely to re-read Life in Outer Space from my 2013 selection.

10. Favourite cover of a book you read in 2013?
None of the books I read this year had particularly impressive covers. I suppose Creepy and Maud by Dianne Touchell would be my favourite due to the simplicity, gender neutrality and how it reflects the story.

11. Most memorable character in 2013?
Friday Brown from Friday Brown by Vikki Wakefield or Allyson Healey from Just One Day by Gayle Forman. Both characters stayed in my head for the days that followed completing the books and I just couldn’t stop thinking about them.

12. Most beautifully written book read in 2013?
Friday Brown. Or Zac and Mia by AJ Betts

13. Book that had the greatest impact on you in 2013?
Once again, Friday Brown, Just One Day, and Zac and Mia

14. Book you can’t believe you waited UNTIL 2013 to finally read?
Shutterspeed by AJ Betts 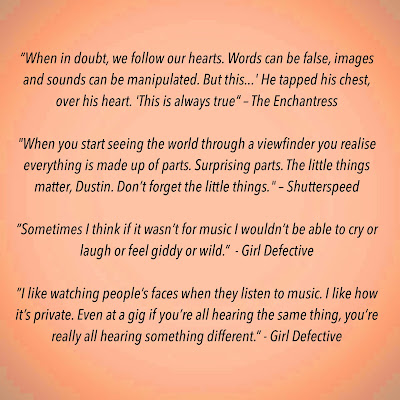 16. Shortest & Longest Book You Read In 2013?
Shortest was Shutterspeed by AJ Betts at 160 pages and longest was the final book in The Secrets of the Immortal Nicholas Flamel series, The Enchantress, by Michael Scott at 513 pages.

17. Book That Had A Scene In It That Had You Reeling And Dying To Talk To Somebody About It? (a WTF moment, an epic revelation, a steamy kiss, etc. etc.) Be careful of spoilers!
I don’t really recall needing to discuss the scenes with people but they were definitely ‘!!!’ moments: Willem and Allyson in the artist squat (Just One Day) and Rachel and Mycroft finally breaking the tension in Every Breath. I’m also pretty sure there were some seriously ‘awww’ moments in Life from Outer Space.

18. Favourite Relationship From A Book You Read In 2013 (be it romantic, friendship, etc).
My favourite friendships would have been between Sybilla, Michael and Lou in Wildlife by Fiona Wood, and the individual friendships between Allyson and Dee and Allyson and Wren from Just One Day. Other great friendships can be found in Psych Major Syndrome by Alicia Thompson and Life in Outer Space.

19. Favourite Book You Read in 2013 From An Author You’ve Read Previously:
Just One Day by Gayle Forman

22. Newest fictional crush from a book you read in 2013?
Nathan from Psych Major Syndrome

24. Most vivid world/imagery in a book you read in 2013?
Friday Brown. It's contemporary but the descriptions are are breathtaking. I was completely mesmerised by the prologue.


27. Book You Read in 2013 That You Think Got Overlooked This Year Or When It Came Out?
Zac and Mia. While it won the Text Prize, it received unwarranted scepticism from people who compared it to The Fault in Our Stars without reading it.

1. One Book You Didn’t Get To In 2013 But Will Be Your Number 1 Priority in 2014?
I have a lot of these, so many in fact I actually made a reading challenge for 2013 to try and tackle them all. I failed miserably so all but three go back on the list. Wild Awake by Hilary T. Smith is a new addition and goes straight to the top of the list. Also, This Song Will Save Your Life by Leila Sales has shown up on lots of people lists as a favourite book for 2013 so that’s also been added.

2. Book You Are Most Anticipating For 2014 (non-debut)?
Without a doubt, TheHowling Boy by Cath Crowley. Haven't read anything by Cath? Check out Graffiti Moon or A Little Wanting Song.

3. 2014 Debut You Are Most Anticipating?
Me Since You by Laura Wiess

4. Series Ending You Are Most Anticipating in 2014?
Isla and the Happily Ever After by Stephanie Perkins is technically a companion novel but I think it still counts. I’m also looking forward to the final Daughter of Smoke and Bone novel by Laini Taylor, Dreams of Gods and Monsters.

5. One Thing You Hope To Accomplish Or Do In Your Reading/Blogging In 2014?
My main goal is to keep the blog running as it has severely suffered throughout 2013. I’d like to read more than I did this year and post at least once a week. Basically, get my blogging mojo back to where it was when I first started.

I'm pretty disappointed in myself this year as I failed epically at reaching all of my reading challenges, mostly due to uni being far more demanding than I anticipated. I only managed to read 24 books this year, although I am pleased to say that 12 of these were Australian authors and out of the 24, 9 were debut authors.

I did get to take part in some pretty cool events though. In February I went to the Perth Writers Festival and met the amazing Vikki Wakefield and caught up with AJ Betts. In March I hosted Aussie Author Month and interviewed and reviewed a bunch of fantastic Australian talent.

June saw me head over to Melbourne for the Reading Matters Conference where I got to hang out and discuss YA with Danielle from ALPHA Reader and Adele from Persnickety Snark, as well as YA royalty Libba Bray, Gayle Forman, Fiona Wood and Vikki Wakefield, as well as many others.

Back in Perth, August saw the launch of Zac and Mia, the Text Prize winning book from Perth author AJ Betts. I also happened to be back in Melbourne in December and so pure luck allowed me to attend the Centre for Youth Literature's The Year Ahead in Youth Literature where we got a sneak peak from the publishers into the 2014 YA releases.

When I look at it like that, the year doesn't look so bad, regardless of how many books I read!
Posted by Jess - The Tales Compendium at 9:14 AM