Creepy and Maud by Dianne Touchell 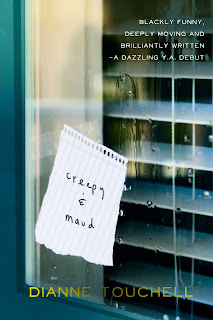 Blurb:
I am in love with the girl next door. Our windows are almost opposite each other's, over the side fence.

I call her Maud. That's not her real name but that's what I call her. She's sort of shortish and curvy. Titian hair. No freckles. A dark, smudgy birthmark on the back of her left calf. A nose piercing her dad knows about and a bellybutton piercing I assume he doesn't. All right, so I have spent a bit of time looking in there.

Am I sounding creepy? Love is sort of creepy. When you fall in love, you presuppose all sorts of things about the person. You superimpose all kinds of ideals and fantasies on them. You create all manner of unrealistic, untenable, unsatisfiable criteria for that person, automatically guaranteeing their failure and your heartbreak. And what do we call it? Romance. Now, that's creepy.

In A Nutshell:
Creepy and Maud is an off-beat novel with peculiar characters who view the world from a distance. The story is told in first person, swapping between the two title characters, although not evenly. The text is often blunt, but lyrically interesting, and matches the quirky and slightly odd characters who are just trying to make a connection with someone who understands them.

My Review:
Creepy and Maud is not your typical young adult novel. It is off-beat with peculiar characters who view the world from a distance. Both Creepy and Maud live lonely lives, ostracized by their peers for being ‘weird’ and kept at a distance by their parents who either don’t understand them, or are too caught up in their own lives to notice their children.

Creepy is quizzical. He spends his time reading and watching the girl next door through his window, who he has nicknamed Maud. His favourite possession is a dictionary, sorry, a Collins Australian Internet-Linked Dictionary (with CD-ROM), which aids him as his thoughts run off on tangents concerning any random thing he can recall. The kids at school think he is creepy, hence the nickname, and generally stay away from him, and that is how he likes it.

Maud is a sad, quiet girl who loves to draw but suffers from trichotillomania, a compulsive condition where the sufferer feels the need to pull out their own hair. Like Creepy, she has no real friends and an uncomfortable home life. When she first sees a note pinned to Creepy’s window, their solitary lives become intertwined.

We never find out the real names of Creepy and Maud. The story is told in first person, swapping between the two title characters, although not evenly. The text is often blunt, but lyrically interesting, and matches the off-beat and slightly odd characters who are just trying to make a connection with someone who will understand them and see past what the rest of their community sees them as; weird.

“We have our own place in the space between windows.”