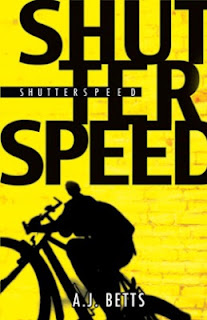 Living alone with his silent father and the shadow cast by his long-dead mother, Dustin waits, wanting only to slip under the radar and survive what’s left of high school and through his work at the photo lab. Then one Sunday, a single photo gets stuck in the processor and it changes everything: the bike in the picture is decent—a Ducati Monster 620, cherry red—and the woman, Terri Pavish, beside it is striking too. What begins then as an innocent curiosity in her photography, her freedom, her speed, becomes something else and the past swings full-circle to haunt him.

ShutterSpeed is the story of a teenage boy looking for answers but who gets caught up in a frantic obsession that forces him to take a step back and pay attention to the realities of his life. Personal boundaries, mental health and adolescent friendships are highlighted in this psychological teenage drama set in Western Australia.

At its core, ShutterSpeed is a novel about a boy who is haunted by the death of his mother, and who is trying to escape reality but instead really needs to take a closer look at what is going on around him. Instead of getting caught up in fantasies in his head, he needs to look at what makes life worth living.

When Dustin becomes captivated by a woman in a photograph, he becomes unpredictable, to the point of developing stalker-ish tendencies. He feeds on the adrenalin that spikes when he catches a glimpse of her and he eventually becomes frantic when his private world becomes entwined with his public persona.

Realistic teenage situations are put to the test as Dustin struggles with the direction his friendship group is taking and the complicated times when boy/girl friendships are threatened by enhanced feelings. The relationship between Dustin and his father is also an interesting study of two broken men who don’t know how to communicate properly. Personal boundaries and mental health issues are also highlighted in this psychological teenage drama.

The preface of ShutterSpeed was perhaps one of my favourite passages from this debut novel by AJ Betts. In those first two pages, it took me right back to my high school days in the photography lab, developing film, worrying that I had done the chemical measurements incorrectly and that it would ruin the precious images I had captured. It reminded me of the thrill of unwinding the developed film and looking over the negative strip. It led me to question whether I made the right decision not to accept an offer to study photography after year 12.

I think that is the power of a well-written novel, to resonate with its reader so much so, that the said reader questions a decision they made eight years ago. The other joy for me was the setting. ShutterSpeed is set in Western Australia (where I live) and more specifically the Fremantle and Cottesloe areas. I could actually picture the direct routes that Dustin takes on his way home on his bike, the movie theatre he goes to, the beach where he and Jasmine take photos and the parrots that make a racket (I swear you cannot hear yourself speak if you turn up at Cottesloe beach at 5:30pm due to those bloody parrots!). I could even identify the news reports that Dustin and his father watch on TV using the throwaway comments from the chapter. It is so nice to read stories set in familiar locations.

When you start seeing the world through a viewfinder you realise everything is made up of parts. Surprising parts. The little things matter, Dustin. Don’t forget the little things.
Posted by Jess - The Tales Compendium at 7:58 PM