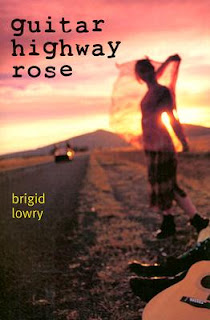 Blurb:
Rosie is restless. She wants a nose-ring, and more... she wants to do something. Asher is the new boy in her class. He has dreadlocks, a guitar and a bad case of the gypsy blues. And he just wants to get away.

Sometimes we know we shouldn't and that's exactly why we do.

In A Nutshell:
Guitar Highway Rose is a novel about growing up. It’s about the family dynamic, in a variety of forms such as mothers and daughters, husbands and wives. It’s about teenage acts of rebellion and the restlessness felt at being in that limbo age of adolescents. And it’s about hope.

My Review:
I thought I would finally attempt to review one of my all-time favourite novels, Guitar Highway Rose. Even though I have re-read it countless times, I’ve never written a review for it, preferring to take comfort in an old favourite and forget trying to put my feelings into words, something I often find harder to do with favourites.

So, how to sum up a book that pretty much made me the reader I am today? Without the likes of this, and Margaret Clark, John Marsden, Jaclyn Moriarty’s Feeling Sorry for Celia, and Glyn Parry’s Scooterboy, I don’t know where my reading abilities or habits would be.

Guitar Highway Rose is set in Western Australia (where I live), and more specifically, the beach suburb Swanbourne, and carefree, hippy Fremantle. And because this is also somewhat of a road trip book, some of the coastal towns north of Perth such as Kalbarri and Geraldton also feature.

Rosie is fifteen. She wants a nose-ring and dreadlocks and is somewhat of a hippy. She’s always fighting with her mum and feels stuck in her life, like she is just drifting through it. Asher has just moved to Perth and he couldn’t be feeling more stifled and annoyed if he tried. He misses Byron Bay (that’s near Sydney for those of you who don’t know – Perth is on the opposite side of Australia) and his friends. And his dad. After pairing up for a poetry assignment, in which Asher suggests studying Jim Morrison, the two find they are somewhat kindred spirits.

While Rosie and Asher are our main characters, the people they are closest to are also key players in telling the story. We get a complete picture of what is going on in everyone’s lives, and how they influence the decisions that Rosie and Asher make. It is uncommon to show multiple, unequal perspectives but Lowry manages to avoid confusing the reader. This is done by the whole story being told in pieces, with little subtitles so you know where and what everyone is thinking or doing when an event affects them, giving the reader a complete insight. Rosie and Asher’s families, Rosie’s best friend Pip, and their English teacher Mr E, help in representing the scattered lives of the everyday family. It also interestingly swaps between first person and third person narrative. Also, when Asher is thinking, the text is without any punctuation which represents the frantic, restlessness that he feels since his life got turned upside down.

There are favourite quotes and songs and little anecdotes included throughout the story to put the events in context and give insight into the personalities of each character.

Seeing as the novel was written 15 years ago, it’s fair to say there are some cultural references that might not be recognised by today’s readers. For instance, Rosie and Asher often refer to their ‘key cards’. This is what a debit card used to be called. There are cassette tapes rather than CDs and their music idols are Bob Marley, The Doors, and The Smashing Pumpkins. If you don’t know who any of them are, then I fear for the musical livelihood of future generations!

In short, Guitar Highway Rose is a novel about growing up. It’s about the family dynamic, in a variety of forms such as mothers and daughters, husbands and wives. It’s about teenage acts of rebellion and the restlessness felt at being in that limbo age of adolescents. And it’s about hope.

Every couple of years I re-read Guitar Highway Rose. I have a first edition copy (1997) that I bought, when I was 12 (1999) AND it is personally signed to me by Brigid Lowry herself. The cover has changed three times with new reprints and I have to say that even though I love the original cover, I really like the new covers too, and this is rare.

Posted by Jess - The Tales Compendium at 6:44 PM