The Mimosa Tree by Antonella Preto 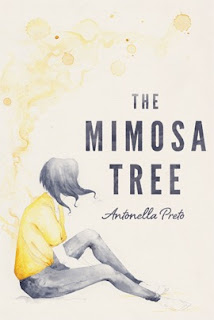 
Blurb:
It’s the summer of 1987 and Mira is beginning her first year at uni. She’s got a radical new haircut, and an all-black wardrobe — she should be having the time of her life.

But it’s hard to get excited about anything when you’re being smothered by your crazy Italian family, enrolled in a course you’re not interested in, and expecting nuclear warfare at any moment.

Even a new best friend and the magnetic boy from art class can’t wipe away the image of a looming mushroom cloud. And Mira’s right. Her world is about to explode, but it’s not the skies she should be checking.

In A Nutshell:
The Mimosa Tree is a story about grief, growing up and the importance of family. Cancer is a strong element of the novel but the story connects because it is surrounded by the everyday happenings of life. The novel will have you laughing, crying and seething in frustration but as you will see, it is how people react and cope in difficult situations that define who they are and who they will become.

My Review:
The Mimosa Tree is a snapshot of the life of seventeen year-old Mira who is an only child growing up in a traditional Italian family in Australia. It’s 1987 and Mira has finally left high school behind. Entering university, she hopes for bigger and better things, for real friends with the same passions and interests as her. But it’s hard to make friends when she dismisses those who don’t appear to be like her and with a stifling and bossy extended family who have an opinion on every facet of her life.

Adjusting to the university workload and an irritating but persistent new friend helps keep Mira somewhat sane from her meddling aunt Via. But, when her mother’s cancer returns, Mira’s life is turned further upside down. With the illness kept a secret from those not in the family, Mira takes her grief and frustrations out on unsuspecting people, such as her new friend Felicia. Mira keeps everything bottled up, becoming isolated because she only really has her exasperating aunts to talk to, which is not ideal.

Mira’s aunt Via angered me so much that I almost put the book down a few times. She was just so incredibly frustrating and pushy and I would go mad if someone like her was always meddling in my life. But, I do understand why she is the way she is and that it is just her way of showing she cares.

I loved Mira. I don’t think a lot of people would probably feel the same way. She’s negative, grumpy and judges people too quickly, but it’s all about protecting herself from getting hurt. It’s a coping mechanism and since she has never had any real friends, it’s hard for her to accept people, particularly when she has a particular image in her head of what new friends might be like. She is an honest character and I love Antonella Preto for writing her.

Mira really frustrated me at times because she doesn’t do anything around the house to help her mother out. This really bugged me because I viewed her as a selfish, spoilt child and couldn’t understand why she didn’t help out more. Then I realised that that isn’t the way the Italian home works. That is the wife’s job, to take care of everything around the house. At least, this is my impression of how it was 25 years ago.

People deal with grief in their own ways and existing relationships are often altered, some for better, some for worse. What Mira discovers is that while family is incredibly important, they are not always enough and sometimes you need the support of people outside the situation to help you cope.

The Mimosa Tree is a story about grief, growing up and the importance of family. Cancer is a strong element of the novel but the story connects because it is surrounded by the everyday happenings of life. For Mira, the difficult transition from high school to university, becoming an adult and learning how to cope with a very sick mother is different to the way in which her father and aunts react. The novel will have you laughing, crying and seething in frustration but as you will see, it is how people react and cope in difficult situations that define who they are and who they will become.

Posted by Jess - The Tales Compendium at 6:58 PM