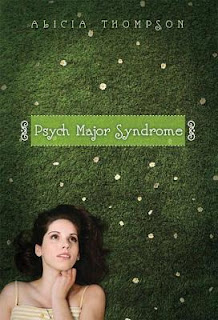 Blurb:
Using the skills you've learned so far in Introduction to Psychology, please write a brief self-assessment describing how things are going in your freshman year.

Presenting Concerns:
The Patient, Leigh Nolan (that would be me), has just started her first year at Stiles College. She has decided to major in psychology (even though her parents would rather she study Tarot cards, not Rorschach blots).

Patient has always been very good at helping her friends with their problems, but when it comes to solving her own...not so much.

Patient has a tendency to overanalyze things, particularly when the opposite sex is involved. Like why doesn't Andrew, her boyfriend of over a year, ever invite her to spend the night? Or why can't she commit to taking the next step in their relationship? And why does his roommate Nathan dislike her so much? More importantly, why did Nathan have a starring role in a much-more-than-friendly dream

Aggravating factors include hyper-competitive fellow psych majors, a professor who’s badly in need of her own psychoanalysis, and mentoring a middle-school-aged girl who thinks Patient is, in a word, naive.

In A Nutshell:
Psych Major Syndrome was a light, unputdownable read that totally filled my quota of favourite things for the day: a college setting, swoon-worthy guy, spunky alternative best friend and a road trip.

My Review:
Psych Major Syndrome has all my favourite things: a college setting, cute guy, spunky alternative best friend, dorm rooms and a roadtrip. It also has all the things that can make life miserable (excluding death and illness): an academic rival, a bitchy girl who you just want to throw the best comebacks at but can never think of them at the right time, and an arsehat of a boyfriend. Throw in a troubled teen in need of someone to talk to, a hippy/new age family and a loveable but rundown old car and you have Leigh Nolan’s life.

It really was just one of those books that makes you feel happy and go ‘awww’. It was a light, unputdownable read that totally filled my quota of favourite things for the day.

Leigh is somewhat neurotic. It seems to be true what they say about psychologists having just as many problems as their patients (Leigh is studying psychology). She can be annoying because, like a lot of girls, she over analyses things and can’t see what is blaringly obvious to everyone around her. But, the whole book was endearing and a total comfort read for me.

Nathan pretty much ticks all the boxes for perfect swoon-worthy guy. He is sweet, pays attention, plays guitar, believes Leigh deserves better *cough* him *cough* and is guaranteed to melt the hearts of everyone who reads Psych Major Syndrome. Prepare for major swoon-age.

Big thanks to Nomes over at inkcrush for this recommendation.
Posted by Jess - The Tales Compendium at 9:58 AM