The Fault In Our Stars by John Green 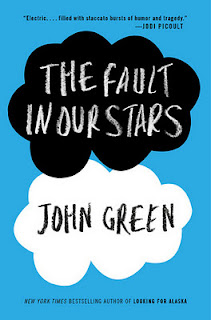 Title: The Fault In Our Stars
Author: John Green
Release Date: 11th January 2012
My Rating: 5/5
Blurb:
Despite the tumour-shrinking medical miracle that has bought her a few years, Hazel has never been anything but terminal, her final chapter inscribed upon diagnosis. But when a gorgeous plot twist named Augustus Waters suddenly appears at Cancer Kid Support Group, Hazel's story is about to be completely rewritten.
In A Nutshell:
Absolutely fantastic book. Read the whole review.
My Review:
I’m not sure I can remember ever reading another book that was so amazingly sad and wonderfully witty at the same time. The Fault in Our Stars had me chuckling and smiling to myself, then moments later in tears, and then back smiling again. Such is the writing power of John Green, who turns a seriously sad subject into one of love, pride, adventure, witty banter, bizarre topics and with characters who have seen so much and are wise and intelligent beyond their years.
John Green fans will not be disappointed with his latest release but should be cautioned to have a box of tissues close by. One of the many moments when they were needed was when Hazel declared she was a grenade. This, while heartbreaking, was also completely understandable from her point of view.
Augustus is funny and charming and has so much heart. He does his best to keep everyone around him upbeat, especially because everyone in the story is suffering with either health or emotional battles. But they also have to deal with everyday problems too, and these are ones Augustus can help with. For example, ‘Support Group Isaac’ goes through the trauma of losing his sight but spends most of the time being more concerned about his love life. Augustus helps Isaac through this with the help of some eggs and Hazel’s driving skills.
I’m not going to comment on the relationship between Hazel and Augustus, except to say that it is special and priceless, heartbreaking and heart-warming. “Okay”.
Hazel and Augustus often discuss their perception and views on their lives as cancer kids and the reality of their morality. Remarkably we don’t get buried in sadness as they are less conventional and clichéd and someone always has something light-hearted to say or a joke to make about their illness.

“I didn’t tell him that the diagnosis came three months after I got my first period. Like: Congratulations! You’re a woman. Now die.” Pg. 24

“…I had a moral opposition to eating before dawn on the grounds that I was not a nineteenth-century Russian peasant fortifying myself for a day in the fields.” Pg. 137

“My thoughts are stars I can’t fathom into constellations.” Pg. 311
“You don’t get to choose if you get hurt in this world, old man, but you do have some say in who hurts you.” Pg. 313
This is the kind of book parents should want their teenagers to read. And it’s the kind of book teenagers will want to read.
A big thankyou to Penguin Books Australia for this review copy.
Posted by Jess - The Tales Compendium at 4:40 PM