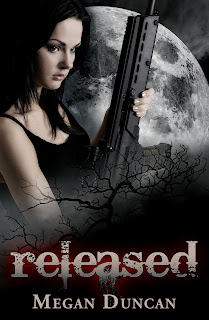 Blurb:
After a demon apocalypse kills their parents and everyone they know, 17-year old Abby Phillips, her brother, Carter, and friend, Max flee their home to travel through what has become the wastelands of America. When radio transmissions of a resistance offering shelter and safety cease, Abby is tempted to give up. Struggling to overcome life-threatening obstacles in their dangerous journey, Abby and her companions quickly discover there are much worse things lurking in the dark than they could have ever imagined.

In A Nutshell:
A kick-butt girl, a post-apocalyptic America and a hot boy who will make you swoon and sweat. Released has plenty of action, suspense, demons and death, with a little romance thrown in as well. Can't wait for the sequel!

My Review:
Released was a novel that got my attention straight away as I love reading books about girls that kick butt and post-apocalyptic-fight-to-survive type stories.

Strange demons have taken over the world and Abby, Carter and Max decide the time has come to set off across America and find other survivors and a place of refuge. As they travel from Washington to New Mexico using whatever means necessary to survive, they each have their roles to play; Carter, the brains and the one his sister and best mate turn to for ideas, and Abby and Max, the ‘brawn’, with their unspoken agreement to watch out for Carter who is less skilled in the self-defence/fighting department. The developing relationship between Abby and Max is sweet and a ray of light in the grim reality of what awaits them around every corner.

As the trio get closer to New Mexico, they stumble upon other survivors and take in the distraught Taya who joins them on their journey and turns out to be more capable than originally thought. They also come across what appears to be a well-organised refuge, although something about the relationship between the leader and those who live there doesn’t fit right with Abby, Carter and Max. When they try to help, they are thrown into a whole unexpected bout of trouble other than the demons. Fighting for their survival suddenly got a lot more complicated than they thought it would and Abby has to question which lines she will cross, and how far she will go, to protect the ones she loves.

Released has plenty of action, suspense, demons and death, with a little romance thrown in as well. Our characters have managed to hold on to their humour despite their dire circumstances and they are smart and tough teenagers who readers will become attached to. There are no boring bits and I can’t wait to read the sequel, Chaos, when it is released early 2012.
Posted by Jess - The Tales Compendium at 10:26 PM