The Taste of Apple by James Laidler 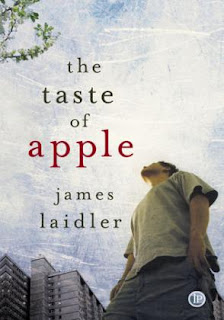 
Pedro Jones is lost. Abandoned by his father and forced into commission housing with his Filipino immigrant mother, the future seems bleak.

But when Pedro meets the 'mad' street busker, Johnny Lazzaro, and gets involved with the East Timor freedom movement, life takes an unexpected detour through the uncharted back-blocks of the human heart.

The Taste of Apple is the winner of the IP Picks Award for Best First Book 2010.

In A Nutshell:
The Taste of Apple is a verse novel set in Australia during the late nineties and comes with an accompanying CD featuring music and lyrics relating to the book. It is a story about finding out who you are, the issues of racism, government accountability and responsibility, and highlights the plight of the East Timorese trying to seek asylum after the Dili Massacre of 1991.

My Review:
Set in Australia mostly during the late nineties, The Taste of Apple is a book about finding out who you are, discovering the simplest life-lessons from unexpected people, the issues of racism, government accountability and responsibility, and looks at rising to a challenge no matter what kind of hurdles are thrown your way. It also highlights the plight of the East Timorese trying to seek asylum after the Dili Massacre of 1991.

The book, told entirely in verse, is set apart by six chapters, each chronicling different stages of our main character Pedro’s life, from age ten to eighteen.


For me though
life was closer
to a tattered old garment
on the verge of unraveling.
There was no “golden thread”;
just frayed edges,
and poorly stitched up seams.

Pedro is struggling, living in a low socio-economic area where he faces daily racism and bullying as well as the added pressure of not fitting in at school. After his father walks out on him and his mother, they move into a council flat. Here Pedro meets local busker and activist Johnny Lazzaro, who is a couple of years older than him. The two form a friendship as Johnny takes him under his wing, educating him about the plight of the East Timorese and life in general. They also spend hours upon hours busking, creating memories and trying to forget the troubles of their lives.

Through the information Pedro gains from his time spent with Johnny, and Paddy, Lisa and Sister McKenzie who are also seeking to educate people about the hardships faced by the people of East Timor, Pedro’s world opens up, and he becomes more world-weary and knowledgeable. By request of his mother, he also befriends five-year-old Evie and old Mr Santiago, who live in the building. Pedro and Johnny help them in the new community garden project behind their 22-story council flat, giving both Pedro and Johnny another avenue to direct their energy.


The garden hose
held by a five-year-old’s hands
can be a dangerous weapon;
capable
of spraying
more than water,
but laughter and mayhem in every direction

All these little things help give Pedro purpose and his depressing situation slowly builds into something more positive.

An audio CD also accompanies the book with music written by Don Stewart and words/lyrics by James Laidler. It is a mixture of spoken word and song that are substituted for parts of the story or that add to what is already on the page (eg: When Johnny plays a song on his guitar, you can listen to that song on the CD. Or, when Pedro writes a poem you can listen to a reading of that poem with accompanying music). While I don’t believe having the CD is essential to the story, it does add depth and provides a richer experience. I was particularly taken with track 7 titled Johnny’s Song and also really enjoyed Season’s Apart, God Bless the Grass and Richmond Town.


Fireworks
spangle the sky.
Explosions
glitter-weep
then die,
while I
stand 22 storeys high
thinking of nothing
but Johnny tonight.

This was my first verse novel and while I’m still not totally convinced it is a format that I enjoy, I did breeze through the book and was able to appreciate the story that was being told and the benefits of said format. As you can see from the quotes I have provided, the descriptive language used was captivating. I also believe this would be a good text for high school students to study, with plenty of issues up for discussion.


“Better you eat the apple, Pedro
than the apple eat at you.”

The Taste of Apple can be purchased from the IP website.

James Laidler's website.
The Taste of Apple on goodreads.

Second Opinions
Words on Paper
bean there, read that

Posted by Jess - The Tales Compendium at 1:56 PM