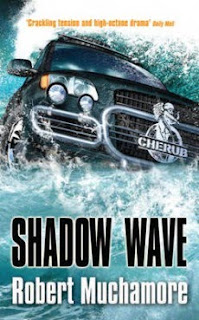 
Blurb:
After a tsunami causes massive devastation to a tropical island, its governor sends in the bulldozers to knock down villages, replacing them with luxury hotels.

Guarding the corrupt governor’s family isn’t James Adams’ idea of the perfect mission, especially as it’s going to be his last as a CHERUB agent. And then retired colleague Kyle Blueman comes up with an unofficial and highly dangerous plan of his own.

James must choose between loyalty to CHERUB, and loyalty to his oldest friend.

My Review:
Shadow Wave is the twelfth and final Cherub book featuring our hero James Adams. James is now seventeen and, after finishing up his undercover assignment with the Brigands M.C., he is looking at one last mission before retiring as a Cherub agent.

Just under a third of the book is dedicated to a mission James' friend and ex-agent Kyle worked on four years earlier, which provides us with all the background information as to why James will need to make a decision whether to meet up with Kyle and be part of an unauthorised mission, or keep his assigned final job.

Cherub is a guilty pleasure of mine and I feel that Shadow Wave was a terrific note to end on. Not only is the subject matter important for today's youth to be aware of, but it is also relevant to them as most would know of the tsunami that is being referred to. Shadow Wave highlights environmental issues, human rights and government corruption. A fitting ending.


About The Series:
For those of you unfamiliar with the Cherub series, author Robert Muchamore created the series after his nephew complained about there being nothing interesting to read. The series revolves around a secret branch of MI5 that trains children to become spies, as people never suspect children. After completing training, kids, from the age of 12 until they are 17, are sent on missions all over the world in an attempt to help bring down illegal operations.

James Adams is our main character and he is supported by his sister Lauren, girlfriend Kerry, best friend Kyle and a host of other agents and ex-cherub agents who now run the compound. We first meet an eleven year old James in The Recruit after he and Lauren are left homeless after the death of their mother. Each book in the series covers roughly 6 months or so in James life so while the first book is written with an eleven year old in mind, as James gets older, so does the content.
Posted by Jess - The Tales Compendium at 7:15 PM