Some of you may have read my review of 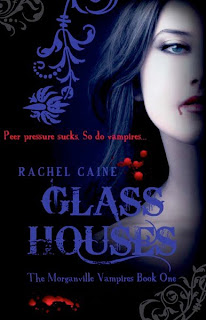 Glass Houses, the first book in Rachel Caine's hugely successful Morganville Vampires series. I've been wanting to review the rest of the series for a while now but have been torn with how to go about it since spoilers would be inevitable.

I've really enjoyed the whole series and am pretty pumped about meeting Rachel Caine in May when she comes to Perth (details for her Australian tour can be found below). The series is so easy to read and because they all flow on from the other, it feels like you are reading one big book. It's like a vampire/human soap opera with plenty of drama.
Morganville could never be dullsville for Claire and her misfit but loveable house-mates. There is always something happening, whether it be life threatening or life-changing. I can't fault the characters and I love reading about what they get up to in their down-time when someone isn't trying to kill them but also how they manage to tackle all the chaos of Morganville with such spunk and wit. They are characters you will become attached to and I'll be sad when the series comes to an end.

So, I've decided to do a semi-spoiler-ish post with a quick run-down of what happens in the rest of the series (books 2-9).

I rate the entire series 4/5.
My review of Glass Houses can be found here.
**Please remember that there are spoilers below so read at your own risk**

2. Dead Girls Dance - Shane's mysterious absent father shows up with a bang, much to the dismay of Shane and other Morganville residents. As he causes chaos around the town, Shane and his house-mates get caught up in his father's vendetta and Shane's life hangs in the balance after being accused of his father's crimes. Claire is faced with non-vampire danger when she is drugged by some frat boys, Michael's strange situation takes another unexpected turn and Claire does the unthinkable and signs away her freedom.

struggles with the latest turn of events concerning Michael, Claire begins some unusual classes with the reclusive and unstable vampire Myrnin at the request of Morganville founder Amelie. There is a case of mistaken identity when one of the only good vampires, Sam, is staked and a new human enemy, Captain Obvious, threatens our friendly neighbourhood coppers Lowe and Hess, among others. Claire finds herself in trouble when she is kidnapped but is rescued by an unlikely source. A fight with Eve's psycho brother Jason lands Shane in the hospital and Claire receives some unfortunate news when her parents inform her they are moving to Morganville. On top of all this, an outside danger arrives in town threatening to ruin everything Amelie has created.

4. Feast of Fools - Outsider Bishop has everyone on their toes, even Amelie and Oliver, with the lives of the Morganville residents hanging by a thread. Claire and Shane's relationship is threatened as vixen vampire Ysandre takes a liking to Shane. Claire's parents discover Morganville's dark secret and Jason continues his violent spree by attacking a prominent member of Morganville.

reign over Morganville continues as the whole town becomes a war zone with residents turning against one another and forming lynching parties. An old foe returns, more people are injured and the death of a Morrell occurs as a building collapses. Myrnin's crazy level peaks to the unimaginable and countless vampires disregard the sun as they are unconsciously called to Amelie in the fight against Bishop. Claire lands herself in more danger when she finds herself under the control of uber-evil vampire Bishop.

6. Carpe Corpus - Morganville goes head to head against Bishop as the city reaches breaking point. Will Bishop's reign hold or will Amelie have one more trick up her sleeve? Myrnin's 'pet' Ada goes homicidal and a Morganville favourite will not survive the final battle.

residents come to terms with the aftermath of Bishop and 'lick their wounds', Eve's life-long dream of being in the annual Morganville Theatre Production comes true when she is cast as the lead. But with it comes Kim, fellow theatre fan and ex-flame of Shane's. But Kim's not just interested in the local play, and when she goes missing, her other activities come to light, activities which could endanger everyone in Morganville. Michael meets a guy in the music business with an exciting opportunity for him, Claire is kidnapped (again?!) and we finally discover who is responsible for the multiple murders of young women in Morganville.

8. Kiss of Death - Amelie grants the four members of the Glass house temporary leave from Morganville to allow Michael the chance to record at a studio in the city but, only on condition that Oliver chaperones them. After leaving town, the five of them run into unexpected trouble that spirals out of control. When they happen upon another vampire 'settlement', the danger they find themselves in escalates and they discover an unlikely ally in wayward vamp Morley. Eve gets herself a new car and slowly begins to rebuild her relationship with her brother Jason while Shane presents Claire with a gift, one that leaves no doubt about how he feels about her. Amelie brings Michael, Eve, Claire and Shane back to earth with a veiled threat that they will never be allowed to leave Morganville.

9. Ghost Town - With the demise of Ada, Morganville's

defences are non-existent. When Claire stakes a vampire in self defence, a crime punishable by death, Amelie presents Claire with an impossible choice. Forced into sleepless imprisonment until she repairs the town's barriers, Claire must fix Morganville's support system before she goes delirious from sleep deprivation. She successfully accomplishes the impossible but after Myrnin makes an adjustment of his own, the whole town is affected. As resident slowly lose three years worth of memories, Claire attempts to convince Amelie and Myrnin of the glitch, but runs into trouble when they forget who she is. With Myrnin more dangerous than ever before and Amelie and Oliver fighting over leadership, Morganville has never been more dangerous and Claire has never felt so alone.