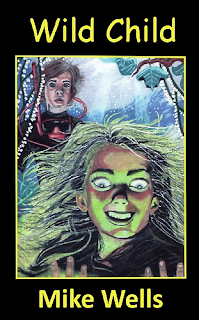 Briana Fox is the wildest girl in school. She and Kyle have been friends for a long time...almost lovers. When Briana challenges Kyle to a swim across the lake, she's injured in a terrible accident, but also discovers a mysterious substance in an underwater cave. What seems to be a magical yet harmless "power drug" turns out to have unexpected properties. Briana soon becomes dependent on it for her very survival. When two government agents get wind of their discovery, they will stop at nothing to force Kyle and Briana to reveal its source.

My Review:
Wild Child is a short, fantasy story set in America about Kyle and Briana, who discover magical green water in a cave under the cliffs where they are swimming. When government agents become aware of the abnormal water, they make it clear to Kyle that they'll stop at nothing to gain access to it, but as Briana's life hangs in the balance, Kyle is put in an impossible situation.

My only criticisms are that it took me a while to figure out how old Kyle and Briana were. At the beginning, Briana acted rather immature, pressuring Kyle into doing things that were dangerous, and spoke as if she was fourteen or fifteen years old. But, there were small drug and alcohol references as well as sexual innuendo that led me to think maybe she and Kyle were in their twenties. By chapter five they were both acting more their age, which I found out is eighteen, and this carried through to the end of the book.


I personally don't approve that both of them were drinking alcohol while swimming out in the middle of nowhere. It's not the fact that they were underage (in America anyway) but more so that there was no lesson in it. It is so dangerous to swim when drinking and since the story is aimed at young adults and is read by high school students, I felt this small part of the story should have been omitted, as it wouldn't have made a difference to the plot.

That said, it was fast-paced and had me racing to find out how Kyle and Briana would get out of their predicament. It will leave readers choosing sides; do you live for the moment or stop to consider the consequences?

I liked Kyle and his loyalty towards Briana, even though he didn't agree with what she was doing, he was just so grateful that she was alive. I admired him for sticking to his opinions about the water when Briana pestered him to drink it and I liked that he stuck up to his father and the government agents even when they were threatening him.

Wild Child is a fast, suspenseful thriller with an ending I never saw coming.

Wild Child is an ebook and can be purchased through Smashwords, Amazon or Amazon UK.
For more information visit the author's website.
Posted by Jess - The Tales Compendium at 9:24 PM