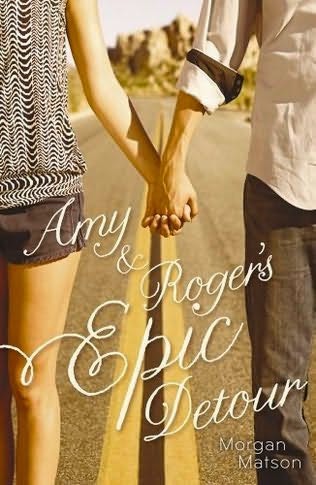 Blurb:
Amy Curry is not looking forward to her summer. Her mother decided to move across the country and now it's Amy's responsibility to get their car from California to Connecticut. The only problem is, since her father died in a car accident, she isn't ready to get behind the wheel. Enter Roger. An old family friend, he also has to make the cross-country trip - and has plenty of baggage of his own. The road home may be unfamiliar - especially with their friendship venturing into uncharted territory - but together, Amy and Roger will figure out how to map their way.

In A Nutshell:
Who doesn't love road trips?! I read the whole thing with a smile on my face and now it has joined my list of 'favourites'. Read this. Now.

My Review:
I absolutely adored Amy and Roger’s Epic Detour. I bought it four years ago when I was in the US and since then have been too scared to read it, fearing it wouldn’t live up to my extremely high expectations (road trip stories are my favourite kind). But right from the first page, I loved it and I’ve always wanted to do a proper US road trip so it all just added to the excitement for me. I read the whole thing with a smile on my face, completely absorbed as Amy and Roger began the pre-planned trip across North America that Amy’s mother had mapped out for them. But before you know it, the virtual strangers throw caution to the wind and choose their own path in an attempt to find their way in life and on the road.

Every road trip needs music so song lyrics and music pop up throughout the book, whether it be singing along to a song, quoting a musician or used as an opening to each chapter. Roger’s playlists are a fixture with him creating a different one for each new detour, and these are shared with us in Amy’s scrapbook (which we get to look at) as she makes notes about the random happenings and useless information she discovers along the way. Eventually, after much begging from Roger, Amy agrees to let him listen to her playlists, which turn out to be filled with songs from various musicals.

All this awesome, crazy, random stuff helps coax Amy out of her devastated shell and wake Roger up from his heartbroken state as they realize there is so much in life to be excited about and that it doesn’t hurt to let people in.

This book was just so much fun and I really didn’t want it to end! Definitely another one to add to the 'comfort read' pile.
Posted by Jess - The Tales Compendium at 11:29 AM