The Flywheel by Erin Gough 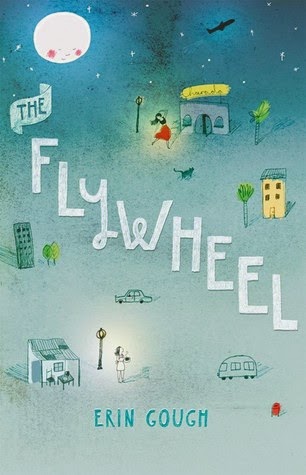 
Seventeen-year-old Delilah's crazy life is about to get crazier. Ever since her father took off overseas, she's been struggling to run the family's café without him and survive high school. But after a misjudged crush on one of the cool girls, she's become the school punchline as well. With all that's on her plate she barely has time for her favourite distraction – spying on the beautiful Rosa, who dances flamenco at the tapas bar across the road.

Only her best friend Charlie knows how she feels about Rosa, but he has romantic problems of his own. When his plan to win an older woman's heart goes horribly wrong, Del is the only one who can help Charlie stay out of jail.

All this leaves Del grappling with some seriously curly questions. Is it okay to break the law to help a friend? How can a girl tell another girl she likes her without it ending in humiliation and heartbreak? And – the big one – is it ever truly possible to dance in public without falling over?

The Flywheel is a very special book and has snuck into a little corner of my heart. I hope you love it too.

Every now and then a book comes along and leaves you with an indescribable bubble of excitement that you don’t know how to express but you just want everyone else to experience. The Flywheel was one of these books for me.

Through a small amount of bad luck, seventeen-year-old Delilah has ended up running her father’s café, The Flywheel, after their manager is deported. Not wanting to spoil her father’s much-needed holiday, Del believes she can fix the problem without needing to inform him. But what started with Del taking a day off school to interview a new manager, turns into a week and then a month and so forth.

Unfortunately, that’s not all Del has to deal with as the problems in her life begin to pile up. From the beginning, Del is the subject of ongoing anti-gay harassment at school. Her love-sick best friend Charlie drags her along on a crazy plan that almost sees him thrown in jail. She catches an employee stealing from the café, and she’s arguing with her other bestie, Lauren. But it doesn’t stop there. Del’s screwed up things with the flamenco-dancing, grass-roots campaigner Rosa from across the street who she has had a crush on for ages, and a corporate franchise threatens to close The Flywheel.

The Flywheel is the kind of book that emphasis the reason YA lit is so important; it speaks to readers assuring them they are not alone.

Del and the people in her life are realistic characters, each with their own flaws and virtues. Their paths are all going in different directions, some expected and some not but they learn its ok to not know who they are and what they want right this minute. There is no ‘right’ way in life as to how to handle the ups and downs that are thrown at you. Everyone handles themselves differently, and Gough’s characters, particularly in the form of Del, Charlie, Rosa and Lauren emphasis this. They also learn that you can’t just force people to do things; they have to come upon the realisation themselves. Del in particular has to learn that just because she is confidant with who she is and has accepting friends and family, that doesn’t mean others are quite at the same stage as her.

The Flywheel was the 2013 winner of Hardie Grant Egmont’s Ampersand Project. Following in the footsteps of the 2012 winner, Life in Outer Space by Melissa Keil, The Flywheel has snuck in and snuggled into a little corner of my heart.

I read The Flywheel in one go, sitting down to read the first chapter before bed and the next minute discovering it was 1:30am and the book was finished. There was nothing I didn’t like about Erin Gough’s debut and I look forward to her future additions to the Aussie YA scene.

Thank you to Hardie Grant Egmont for this review copy.

If you liked this, try: The Incredible Adventures of Cinnamon Girl, Wavelength, The First Third and/or Wildlife.
Posted by Jess - The Tales Compendium at 3:06 PM