The Revenge of Seven by Pittacus Lore 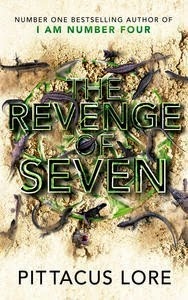 Blurb:
The worst was supposed to be over. We were reunited after a decade apart. We were discovering the truth of our past. We were training and getting stronger every day. We were even happy...

We never imagined the Mogodorians could turn one of our own against us. We were fools for trusting Five. And now Eight is lost forever. I would do anything to bring him back, but that's impossible. Instead, I will do whatever it takes to destroy every last one of them.

I've spent my entire life hiding from them, and they've stolen everything away from me. But that stops now. We're going to take the battle to them. We have a new ally who knows their weaknesses. And I finally have the power to fight back.

They caught Number One in Malaysia.
Number Two in England.
Number Three in Kenya.
And Number Eight in Florida.
They killed them all.
I am Number Seven.
I will make them pay.

My Review:
*** Please note this review contains spoilers. Do not read if you have not read The Fall of Five ***

Here’s a little recap from The Fall of Five…

Following Five’s betrayal, Eight’s death and the attack on the Garde’s penthouse in Chicago, the surviving Loriens and their human friends are in disarray and unable to contact each other.

In Chicago, Four awakes from his sleeping nightmare to find the penthouse under attack. With Sarah, Sam and Malcolm fighting the Mogs, Four makes a decision based on the vision to let the Mogs take Ella to Setrakus Ra, knowing she will not be harmed, while he saves Malcolm and the others. While gathering their chests, Four is almost killed except he is saved by Adam, a ‘good’ Mog who helped Malcolm rescue Sam earlier on. Four agrees to accept his help, although is still wary of him. After Five kills Eight in Florida, Six, Nine and Marina escape Five and the Mogs using Six’s invisibility. However they have to leave Eight’s body behind.

The Revenge of Seven starts with the Chicago Garde driving to Washington DC while the Garde in Florida try to find their way out of the swamp without Five or the Mogadorians spotting them. With no idea that the penthouse has been destroyed, they focus their anger on Five and try to figure out how to get Eight’s body back before the Mogs can begin experimenting on him.

Meanwhile, Ella is on Setrakus Ra’s spaceship. With no way of getting a message to the Garde and while Setrakus Ra politely attempt’s to convince her of his vision, things quickly turn nasty and Ella is put in danger in a way never expected.

Separated and with no way to communicate with each other, things only get worse for the Garde when the Mogadorians war ships land on earth. And then all hell breaks loose. The final battle has come, and no one is prepared for it so soon.

I don’t think anyone was more surprised than me to discover how much I have loved this series. I usually reject sci-fi books, particularly ones that have aliens, but right from the beginning I have been sucked into the Lorien stories and have stuck with the series all the way through. Admittedly, I kind of hoped everything could continue on as it has been and I wouldn’t have to get involved in reading about alien invasions. But the time has finally come and while I have started to waver a little, I’m still interested to see where the storyline will go, particularly now that we have been left with a few plot twists at the end of The Revenge of Seven and the introduction of unlikely allies. It’s also interesting to see some old characters show up and see how they contribute to the current plot. In any case, I’m sticking with the Lorien Legacies and I hope you will too.
Posted by Jess - The Tales Compendium at 11:28 AM