The Diviners by Libba Bray 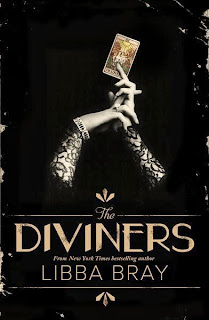 Evie O'Neill has been exiled from her boring old home town and shipped off to the bustling streets of New York City - and she is pos-i-tute-ly thrilled! New York is the city of speak-easies, rent parties, shopping and movie palaces, and soon enough Evie is running with glamorous Ziegfeld girls and rakish pickpockets. The only catch is that Evie has to live with her Uncle Will, curator of the Museum of American Folklore, Superstition, and the Occult - also known as 'The Museum of the Creepy Crawlies'.

When a rash of occult-based murders comes to light, Evie and her uncle are right in the thick of it. Even Evie's new pals - hoofers, numbers runners and activists, but all swell kids - are drawn into the investigation. And through it all, Evie has a secret: a mysterious power that could help catch the killer - if he doesn't catch her first...

In A Nutshell:
The Diviners is an intricately woven story of superstition, old magic, religious zealots and race relations. It also portrays the different ways love and family can take shape, how meaningful those relationships become, and what people would do for the ones they love. Although the novel is a about a serial killer, there are many other aspects to it and you’ll find that amongst the suspense and superstition, there is an exploration of what drives cults and religions, but this is also balanced out at the same time with fun, light-hearted frivolity. I loved it!

My Review:
I "pos-i-tute-ly" loved The Diviners. Libba Bray’s storytelling abilities continue to blow my mind. The first chapter is amazing and sets the scene for the rest of the book. We are thrown right into the belly of the beast which is Manhattan in the 20’s and we get an insight into all the different boroughs of NYC and how it was then.

Right from the beginning we know the murderer is Naughty John, but we follow the characters as they are introduced to us and as their lives become affected by Naughty John’s actions. John is a fantastic and truly creepy villain and you never know who he is going to go after next, sometimes it’s a stranger, other times it is one of the characters already known to us. Each chapter I was worried one of my favourites was about to be killed. I dare say I wouldn’t read parts of this at night when you are home alone cos you may just get a little too creeped out!

There are lots of characters to keep track of but this isn’t hard as they are all given plenty of page-time as their lives and secrets are discovered. Our main character Evie likes to have a good time and sometimes forgets to think before she acts. Arriving in the Big Apple from Ohio with her clairvoyant abilities a secret, her pending new lifestyle has her brimming with excitement. She’s sassy and at times selfish, but she has a good heart and if you don’t like her at the beginning, she will definitely grow on you. Staying with her Uncle Will, Evie joins forces with her New York pen pal Mable, who lives in her uncle’s building. Mabel is often the voice of reason but her complaints sometimes fall on deaf ears, particularly when Evie gets together with the theatrically divine Theta and Henry. Together, Manhattan is their playground.

Evie’s Uncle Will, curator of the occult museum, has a few secrets of his own, as does his assistant, Jericho, and the pickpocket Sam Lloyd, who wrangled his way into Evie’s life and won’t entirely disappear. There’s also the charming Memphis, a poet with a lot on his shoulders, his brother Isaiah whose unusual talent catches the interest of the mysterious Miss Walker and Blind Bill. There’s trumpet player Gabe and attention seeker Daisy, Will’s old friend Detective Malloy and annoying reporter T.S Woodhouse. Let’s not forget Evie and Will’s old neighbours, Miss Adelaide and Miss Lillian, spinster sisters who appear to be losing their marbles. Pretty much everyone has something to hide and as many of the characters meet and their story-arcs cross over, these secrets are slowly revealed.

It is obvious how much research went into The Diviners and it was well worth it as there is so much detail to every scene. The reader is able to fully immerse themselves in the story, feeling as though they are right there with Evie, or in the same room as Naughty John (not always a good thing!), or sitting in the cemetery with Memphis. The story feels so authentic and I could really picture what the 1920’s was like in New York City. The setting is woven so well into the story that readers won’t feel as though they are having descriptive details thrown at them, you just become enthralled with what is going on.

I spent much of the novel reading it as though Libba herself was narrating it after she read aloud at Reading Matters last year. It made it so much fun imagining her theatrically voicing Evie and Theta and the 1920’s slang really helped set the atmosphere.

If you’ve seen The Diviners sitting on a bookshelf, you've probably noticed that it is quite a brick of a book. At 578 pages, my arms did occasionally get sore, but the length was by no means a detriment to the novel. If anything, I am glad it was so long as I didn’t want it to finish. I’m pleased to know there will be a sequel out in late 2014 but until then, make sure you savour all 578 pages!

The Diviners is an intricately woven story of superstition, old magic, religious zealots and race relations. It also portrays the different ways love and family can take shape, how meaningful those relationships become, and what people would do for the ones they love. Although the novel is a about a serial killer, there are many other aspects to it and you’ll find that amongst the suspense and superstition, there is an exploration of what drives cults and religions, but this is also balanced out at the same time with fun, light-hearted frivolity. The Diviners also only scratches the surface of a bigger picture, one which I am sure will be unravelled in the sequel.

This is Libba Bray’s signature storytelling at its best!
Posted by Jess - The Tales Compendium at 3:47 PM