The Rig by Joe Ducie 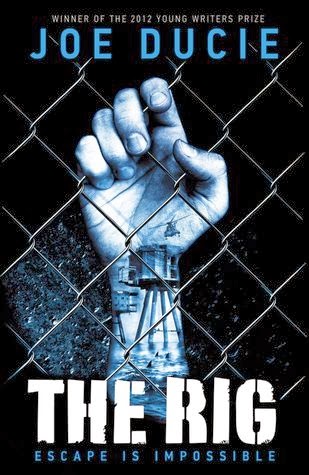 Blurb:
Fifteen-year-old Will Drake has made a career of breaking out from high-security prisons. His talents have landed him at The Rig, a specialist juvenile holding facility in the middle of the Arctic Ocean. No one can escape from The Rig. No one except for Drake...

After making some escape plans and meeting the first real friends of his life, Drake quickly realises that all is not as it seems on The Rig. The Warden is obsessed with the mysterious Crystal-X - a blue, glowing substance that appears to give superpowers to the teens exposed to it. Drake, Tristan and Irene are banking on a bid for freedom - but can they survive long enough to make it?

In A Nutshell:
The Rig is an action packed, suspenseful novel with a male protagonist. Set in a slightly dystopian future with a science fiction element lurking beneath the surface, The Rig is one for fans of the Cherub series, ACID or any other action adventure featuring secret government agencies.

My Review:
Set in 2025, Alliance Systems and their elite soldiers, Crystal Force, maintain and guard The Rig, a floating prison in the middle of the Arctic Ocean. As the "most secure rehabilitation centre” for juvenile offenders, the inmates follow strict rules, guided by their GPS electromagnetic prison cuffs, and work off their stay. For Will, instantly hated by the Warden, this means cleaning out the sewage pipes and tunnels daily.

Will has escaped three prisons already and while he is originally full of bravado when he arrives at The Rig, once he experiences its inner workings, he's not so sure there is a way off the prison. Not unlike a maze, The Rig, housed on a disused oil platform, has a sinister science fiction element lurking beneath the surface, and as Will discovers, his fellow inmates are being used as guinea pigs. Now, more than ever, Will needs to escape and find his way back to land, even if it means leaving his new friends, friends he’s not all that sure he wants in the first place, behind. But between the guards and the other prisoners, not to mention some mysterious disappearances, Will Drake will need to figure something out quickly if he wants to get off the rig alive.

I found it fun trying to figure out how Will would attempt to escape as well as uncovering more details about the other prisoners, particularly Tristan his cell mate, who has a few surprising tricks of his own. Tristan’s character is from Perth, Australia (my hometown) and this is mentioned a few times. It’s always nice to have our little old city mentioned in novels (usually done by authors who live here, like in this case). It was also nerve-racking to see how far Will would push the guards and how much pain he could take from the various incidents that occurred. Some of the characters also remind us that in a corrupt system, sometimes it is necessary to break the law if it’s for the right reasons and that not all ‘criminals’ are evil (please note I in no way condone breaking the law. We do not live in a dystopian society…yet).

The Rig is an action packed, suspenseful novel with a male protagonist for fans of the Cherub series, ACID or any other action adventure featuring secret government agencies set in a slightly dystopian future.

You can find The Rig on Amazon, The Book Depository, or other online retailers.
Posted by Jess - The Tales Compendium at 6:14 PM