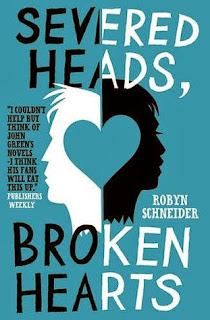 Title: Severed Heads, Broken Hearts (UK/AUS), The Beginning of Everything (US)

Golden boy Ezra Faulkner believes everyone has a tragedy waiting for them—a single encounter after which everything that really matters will happen. His particular tragedy waited until he was primed to lose it all: In one spectacular night, a reckless driver shatters Ezra's knee, his career as a jock, and his social life.

No longer a front-runner for homecoming king, Ezra finds himself at the table of misfits, where he encounters new girl Cassidy Thorpe. Cassidy is unlike anyone Ezra's ever met— achingly effortless, fiercely intelligent, and determined to bring Ezra along on her endless adventures.

Together, Ezra and Cassidy discover flash mobs, buried treasure, secret movie screenings, and a poodle that might just be the reincarnation of Jay Gatsby. But as Ezra dives into his new studies, new friendships, and new love, he learns that some people, like books, are easy to misread. And now he must consider: If one's singular tragedy has already hit and everything after it has mattered quite a bit, what happens when more misfortune strikes?

With lyrical writing, nerdy humor, and realistic romance, Robyn Schneider's The Beginning of Everything is a story about how difficult it is to play the part people expect, and how new beginnings can stem from abrupt and tragic endings.

Major love for this book. If the title doesn't instantly make you want to read it then the inclusion of geocaching, Harry Potter references, flash mobs and nerds being awesome should seal the deal.

My Review:
I absolutely, completely loved Severed Heads, Broken Hearts, but I can't put my finger on the exact reason.

Perhaps it is the coming of age story when the popular kid gives up trying to impress others to fully recognise his own interests and what real friends are. It could be the beginning of first love, the high school setting, or that it portrays that nerds know how to have fun too.

Or it could be the witty remarks, terrible puns, pop culture references which remind me of my childhood, the likeable characters, the music references, the sneaking into college classes, watching Disneyland fireworks from the hood of the car, the flash mobs, the Harry Potter love, debating competitions, geocaching or the giant poodle named Cooper… the list goes on.

Severed Heads, Broken Hearts, aside from having a freakin’ awesome title, has a good mix of comedy and tragedy, with the heart-warming storyline of people finding ‘their people’ but also the heartbreaking moments when life just doesn’t go to plan. Ultimately it asks, when the ‘thing’ you and everyone else have always used to define you disappears, what comes next? Who are you really? In this case, who is the real Ezra Faulkner?

If you liked this, try:
Life in Outer Space by Melissa Keil