The Statistical Probability of Love at First Sight by Jennifer E. Smith 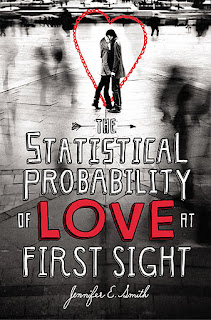 Blurb:
Who would have guessed that four minutes could change everything?

Today should be one of the worst days of seventeen-year-old Hadley Sullivan's life. She's stuck at JFK, late to her father's second wedding, which is taking place in London and involves a soon to be step-mother that Hadley's never even met. Then she meets the perfect boy in the airport's cramped waiting area. His name is Oliver, he's British, and he's in seat 18C. Hadley's in 18A.

Twists of fate and quirks of timing play out in this thoughtful novel about family connections, second chances and first loves. Set over a 24-hour-period, Hadley and Oliver's story will make you believe that true love finds you when you're least expecting it.
In A Nutshell:
A light, quick, romance novel that is great for escaping but could otherwise benefit from being longer with more character development.
My Review:
The first word that comes to mind after finishing The Statistical Probability of Love at First Sight is ‘sweet’. My first thought is ‘that was too short’. It is a story about Hadley, a girl who is desperately trying to avoid coming to terms with the fact her dad is getting married to a woman she has never met.
Set over twenty-four hours, Hadley misses her flight to London the night before the wedding, and has to get the next flight out of JFK, which means waiting around the airport for another 3 hours. This is not something easily done by someone who suffers from claustrophobia and is anxious about seeing her dad again. Up pops Oliver, a cute guy with an English accent who offers to help her with her bags and who they find out has the seat one over from Hadley.
I am a hopeless romantic and I do love these types of stories where people meet in a moment of serendipity. They just make me go ‘Awwww’. Oliver is funny, sweet and manages to calm Hadley down as she begins to freak out about being on the plane. Of course he has his own issues as every hero does but we are not supposed to know what those are until Hadley figures it out later.
For the most part I was completely caught up in the story. I do however think the story needed bulking up a bit more, particularly during the middle; I wish their time on the plane had been developed more. It felt like the plane ride was over too fast and I just would have liked a little more as I really enjoyed the conversations between Hadley and Oliver and Smith’s writing style.
Overall, The Statistical Probability of Love at First Sight is a sweet, contemporary teen romance which was an enjoyable and quick read.
Also, I know it is only the beginning of the year but this cover will definitely make my list for favourite covers of 2012!
Posted by Jess - The Tales Compendium at 4:47 PM