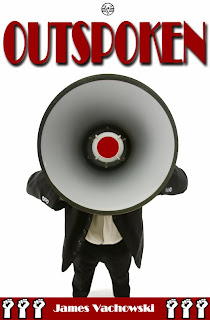 Abraham Lincoln Jenkins is a teenage vandal, social activist, and aspiring revolutionary, but with only four months left until his high school graduation Abraham’s lifelong dream of attending Harvard College is put in jeopardy when he learns that he is still in need of two core credit hours in Physical Education. Unfortunately for Abraham, the only available spaces in a P.E. class are as a cadet in the Army’s JROTC program!
Told almost exclusively through Abraham’s one-sided complaint letters, OUTSPOKEN is the natural result when the War on Terror collides with the War on Christmas.

My Review:
Outspoken is a hilarious collection of an obnoxious, articulate and self-serving letters written by Abraham Lincoln Jenkins to a variety of people who hold 'power'. His letters poke fun at snobby rich people, incompetent police, the school system, the craziness of the Black Friday sales (which I discovered last year while holidaying in America) and provides us with a particular social commentary of America.

You will find yourself laughing at his wit, audacity and all-around "smart alec-ness". Abraham Lincoln Jenkins is the kind of person who would have annoyed the stuffing out of you if you had been the one on the receiving end of his rants but on paper, he is hilariously opinionated and believes whole-heatedly in what he is saying. He would make a fantastic lawyer (which is what he hopes to study if he ever makes it to Harvard).

Outspoken is a 'comedy novelette'. A relatively fast read with letters and quotes making up the 112 pages.


“America is not at war.
The Marine Corps is at war;
America is at the mall.”
— Unknown Marine in Iraq

Outspoken is available at all major digital book retailers, including Amazon, Barnes and Noble, and OmniLit, as well as on the Vagabondage Press website.
Posted by Jess - The Tales Compendium at 3:16 PM