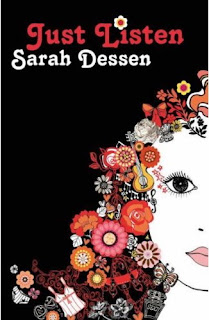 
Blurb:
I'm Annabel. I'm the girl who has it all.Model looks, confidence, a great social life.I'm one of the lucky ones. Aren't I?

My Review:
This is the second time I have re-read Just Listen and I still love it as much as when I first read it a few years ago. I've read a couple of other Dessen books but I didn't connect with them as much as I did with Just Listen.

Annabel used to be the girl everyone envied, until something happened at the beginning of the summer. Her best friend stopped talking to her and now slanders her every chance she gets. Annabel spent the summer in solitude, hoping that once school started again, everything would go back to normal. No such luck. What happened is one of the many secrets that unfolds throughout Just Listen.

Annabel is the kind of person who holds everything in to protect others. She hides her own wants and feelings to protect her broken family. She holds back her desire to quit modelling to protect her mother who once again shows signs of life after having a breakdown. She holds back how she feels towards her sisters and the position she has in the family. She hides what is really going on at school. And she definitely hides what happened at the beginning of the summer. She is on an emotional roller-coaster and what she doesn't realise, is that sometimes, she just has to open up and let others help her, before everything explodes.

Just Listen is not solely about Annabel. While she is the main character, the troubles of the rest of her family and those around her are also heavily highlighted. And each character is amazing, with so much depth, pain, fear, love, confidence and hopelessness.

Kirsten and Whitney are Annabel's two older sisters and I love their complex relationship. Whitney struggles with an eating disorder but Kirsten is the only one in the family that can see what is really happening behind Whitney's lies. One of the most powerful moments in the book, to me, is when Kirsten tells her family that she has warned them but they are choosing not to listen to her. As Whitney's eating disorder really comes to light in one shocking scene with Annabel, everything she has tried to keep hidden is uncovered and we slowly become witness to all of her internal battles.

There are many influential scenes featuring Whitney. Some that stick in my mind include Whitney's concentration as she tends to her herbs, Annabel spying Whitney watching her model from afar and, when Whitney takes part in the open-mike night. It never fails to bring a tear to my eye. Kirsten, the biggest drama queen of all, actually turns out to have her life sorted out the most. You will find that in the book, Kirsten makes a short film about a memory she has. I love that everyone who views it takes something different from it, that is the way art should be, but that it also helps mend Whitney and Kirsten's fragile relationship.

Owen is an outsider. And we all know what happens when the dark and mysterious outsider meets the messed up beautiful girl. I love Owen and his crazy obsession with music. He is so sweet and honest. He believes in honesty above anything else, except music. He introduces Annabel to his "placeholder" way of thinking and teaches her that bad choices and dishonesty can haunt you if you don't do something about them. He is absolutely one of my literary crushes. And his best mate Rolly is like a faithful puppy dog and totally loveable.


"silence is so freaking loud"

Just Listen really gets down to the core of how appearances can be deceiving. I love the symbolism of the family home being made of glass and that what is seen through the glass is very different to the words spoken, and not spoken, on the other side. No one's life is perfect and the myth that someone could have it all is just that, a myth. Sarah Dessen does well to point that out to her readers, that people and families are not always as they seem.

Also, I loved the car wash scene and it really resonated with me.

The first time I went in a car wash when I was little, I thought it was scary but I always felt safe because my parents were with me. Even though I thought it was scary, I loved the darkness and the sight of the water and soap suds running down the windows and the sound of the brushes hitting the sides of the car. Just like our characters, I now view them as a magical, relaxing place and I love to sit in the dark while the water swirls around outside.