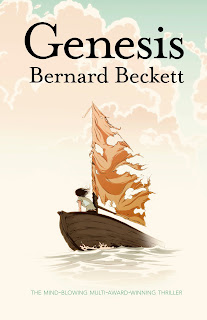 
The island Republic has emerged from a ruined world. Its citizens are safe but not free. They live in complete isolation from the outside world. Approaching planes are gunned down, refugees shot on sight. Until a man named Adam Forde rescues a girl from the sea.

Genesis is a deep, philosophical science fiction novel that leaves your brain churning over the concepts well after you have finished reading it.

As Anax answers questions about her hero Adam Forde, the story unfolds through her answers. We learn the history of The Republic through her knowledge and the holograms she has created about Art, the artificial intelligence that became Adam's companion after his imprisonment for rescuing an outsider. We witness the development of Art, as he watches, learns, and argues with Adam over what differentiates man from machine. Is it the ability to think, to create ideas? Is it the physical aspects? A conscience? A soul? It questions morals, ethics and humanity, and as Anax comes to the end of Adam and Art's story, she has a realisation that blows her world apart.

There were two surprises that I did not see coming and I was completely thrown by the ending. Genesis is a thought-provoking, original read that will bring out the philosopher in all of us. This novel would make for fabulous discussions and would make a great school reading text. Teachers notes are available here, Reading Group notes here.


Genesis has been published in more than 22 countries and has won the 2010 Young Adult Category of the Prix Sorcieres (France), the 2007 Esther Glen Award, and the 2007 NZ Post Book Award. In 2005, Bernard was awarded a fellowship where he worked on a project examining DNA mutations. This led to the writing of Genesis.

Posted by Jess - The Tales Compendium at 4:18 PM