The Wait Is Almost Over...

Inheritance, the final book in Christopher Paolini's Inheritance Cycle series has been revealed and the release date announced! 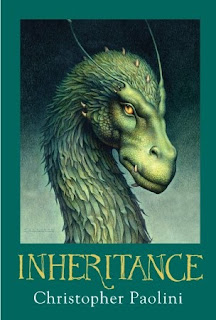 Inheritance will be released 8th November 2011 worldwide.
It is the fourth book in the epic fantasy series following on from Eragon, Eldest and Brisingr and fans have been waiting three years for this info.

While, personally I am not a fan, I am very familiar (due to my time working in a book store) with the amount of hype surrounding this long-awaited title and the eagerness of fans to get their hands on a copy.


"Not so very long ago, Eragon—Shadeslayer, Dragon Rider—was nothing more than a poor farm boy, and his dragon, Saphira, only a blue stone in the forest. Now the fate of an entire civilisation rests on their shoulders.

Long months of training and battle have brought victories and hope, but they have also brought heartbreaking loss. And still, the real battle lies ahead: they must confront Galbatorix. When they do, they will have to be strong enough to defeat him. And if they cannot, no one can. There will be no second chances.

The Rider and his dragon have come further than anyone dared to hope. But can they topple the evil king and restore justice to Alagaësia? And if so, at what cost?

This is the much-anticipated, astonishing conclusion to the worldwide bestselling Inheritance cycle."
Posted by Jess - The Tales Compendium at 7:55 AM