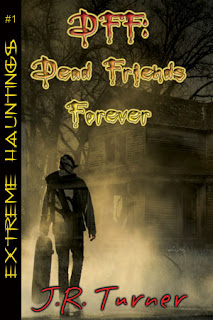 Blurb:
Skater Kaylee Hensler might not be Miss Popular, but there are some friends a girl can do without. When the decaying ghost of a murdered girl decides they need to be total BFF’s, Kaylee will sacrifice the trust of her family, her swim coach’s respect, and any hope of a date for the Harvest Dance.

And oh yeah… discover that super-evil entities are nothing at all like they are on TV or in the movies Aside from seriously bad attitudes, they not only like to kill…but replay the killing again and again for all eternity. To avoid that fate, she’ll have to rely on her wheelchair-bound friend Davey, the mysterious Madame Maggie, and the surprising depth of her own power.
Will Kaylee survive, or will she become someone else's DFF: Dead Friend Forever?
My Review:
This is a suspenseful and scary ghost story aimed at ages 12-15 years old. Fourteen-year-old Kaylee isn't really interested in boys yet, she likes sport and skating and hanging with her best friend Davey, so from this angle I feel it its aimed at the younger teen market but the murdering ghost scenes can really get quite scary so I wouldn't read it while you are alone in the house at night! As I understand, Kaylee gets older in the books that follow and she begins to mature and the consequences she faces get worse. Kaylee's powers also increase and she becomes entangled in a love triangle! This, I am rather intrigued about!

As well as having to deal with a ghost and her murderer, Kaylee still has normal teen issues to deal with, homework, school bullies, swim training and annoying parents. What I liked most about DFF is that Kaylee had to face the consequences, which is unlike a lot of other books. Kaylee's parents, the police and her teachers all take notice of the weird behaviour and situations she ends up in. How is she supposed to explain digging up a grave to the police? What about why she simultaneously opened every locker at school and ransacked everyone's belongings? Oh yeah, the ghost did it! This just doesn't fly and Kaylee's life takes some unfortunate turns other than just having a ghost follow her around. And how on earth do you explain to your psychologist father that you just saw a ghost when he is intent on psycho-analysing everything you do and say?

I would recommend this for those who like paranormal scary stories and for slightly older fans of R.L. Stine's Goosebumps.

Dead Friends Forever and it's sequel, School's Out 4-Ever is available now via Amazon and other online stores. Book three, Detour 2 Death, will be released 15th February.

For you chance to win an ebook of Dead Friends 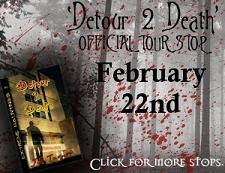 Forever, check back in on February 22nd when J. R. Turner will be stopping by as part of her Detour 2 Death blog tour!

For more information visit J.R. Turner's website or blog.
Posted by Jess - The Tales Compendium at 10:20 AM