Exciting news for Richelle Mead fans today...the cover of Bloodlines has been revealed, YAY, as well as a bit more information concerning the storyline and setting! 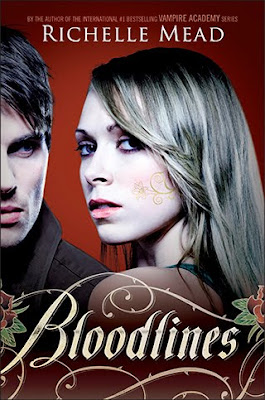 So far, word in the blogosphere is that Jill, Sydney, Eddy and Adrian are all set to be main characters, but it has now be verified by Richelle herself that alchemist Sydney Sage will be the narrator of the series. It will also be set in a Californian high school. And yes, that is Sydney on the front cover. Who do you think the guy is? I suspect the majority will think (read: hope) that it is Adrian but I'm going for a new mystery character :) What do you think?

For more information about Sydney and an interview with Richelle, head to Entertainment Weekly. And for more details about the spin-off series you can check out my post here.
Posted by Jess - The Tales Compendium at 5:37 PM