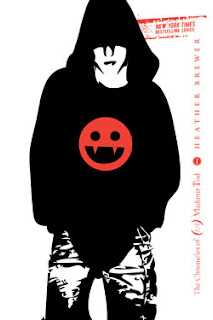 
Blurb:
Junior high really stinks for thirteen-year-old Vladimir Tod. Bullies harass him, the principal is dogging him, and the girl he likes prefers his best friend. Oh, and Vlad has a secret. His mother was human, but his father was a vampire. With no idea of the extent of his powers and no one to teach him, Vlad struggles daily with blood cravings and enlarged fangs. When a strange substitute teacher begins to question him a little too closely, Vlad worries that his cover is about to be blown. And then he realises he's being hunted by a vampire killer, and suddenly hunger, girls and bullies seem not quite such a problem after all.

My Review:
This is not a romantic vampire story. It is the tale of Vlad and his struggle growing up part vampire after his parents died three years ago in an unexplained fire. It is great to have a series where the main character is a boy with a story that will appeal to ages 10-14. There is suspense, humour, a mystery to solve, and Vlad's day-to-day difficulties like getting his blood fix and surviving school.

As an adult, it didn't capture me quite as much as other kids/YA books have in the past but I still enjoyed it and would like to read the rest of the series. I feel this will be a hit with the target age group and also a good book for reluctant readers as the language and behaviour (excluding vampire habits) are easy to relate to. This is not just a book for boys, girls will also enjoy it.

While one mystery is solved in Eighth Grade Bites, there are unanswered questions that will lead you into Ninth Grade Slays, Tenth Grade Bleeds, Eleventh Grade Burns and the soon to be released Twelfth Grade Kills.