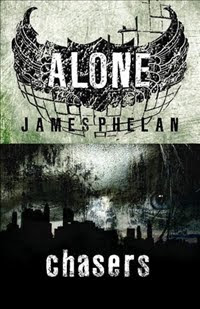 Jesse is on a UN Youth Ambassadors camp in New York when his subway carriage is rocked by an explosion. Jesse and his three friends, Dave, Anna and Mini, crawl out from the wreckage to discover a city in chaos. Streets are deserted. Buildings are in ruins. Worse, the only other survivors seem to be infected with a virus that turns them into horrifying predators...

My Review:
I am in two minds about this book. On one hand I really enjoyed it but when looking back, not a great deal happened. It is like the movie you kept watching, even though it had no really big storyline, because you wanted to see what happened at the end.

This is James Phelan's first foray into YA literature and while the premise of the story is perfect, I do feel it is missing action, the kind that young adult readers need in a book to stay with the story. This could mean they don't stick with the story and therefore do not discover just how good it really is. While this wasn't the case for me, I do think it will be a problem for many that do pick it up.

That said, Phelan is a very good writer as I was constantly on edge waiting for the climax, reading the whole book in an afternoon. To me, the fact that the big twist didn't come until the last chapter didn't deter me as he has built the story up for book 2 in the trilogy to be really exciting (well I hope that is the case anyway). The first chapter of book 2 can be found at the end of Chasers and it sounds like there will be a great deal more action in it, with the reader finally get some answers to what has happened to New York City because at the end of Chasers, we still have no idea what caused the sudden destruction. The characters had plenty of theories but nothing particularly concrete. The story finished very much on a 'to be continued...' cliff hanger.

There were a couple of times when I got slightly confused as to the way a character suddenly reacted to a comment or action by another character. Sometimes it just didn't make sense and I wondered if it was a writing error or part of the story. Without spoiling anything, I can say that it was part of the story. This too applies to the rather annoying lack of speech marks!

Chasers has a lot of similarities to Charlie Higson's The Enemy; children fighting for survival, being alone with no authority figures, having to rely on themselves and their own instincts. I have to say that I prefer The Enemy as more happens in the story and there is more depth to the characters that Higson has created. Bottom line, if you don't have the patience to stick with Chasers until at least the second book, don't bother.

Posted by Jess - The Tales Compendium at 9:03 PM