Beyond Evie by Rebecca Burton 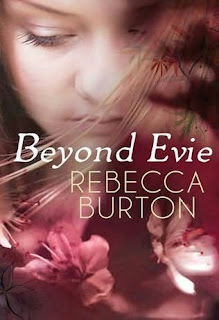 My Review:
Charlotte lives a rather distant life. She loves sport and hanging out with her friends but mostly keeps to herself, especially her thoughts and feelings. But one day, Evie appears. Charlotte has no idea how she feels towards Evie, who is her complete opposite and is always confusing her; she never knows if Evie is being serious, truthful, or just saying something for the shock value. All she knows, is that she feels something.


Beyond Evie explores the relationship between our narrator, Charlotte, and Evie. The story is told from the perspective of Charlotte, addressing the reader as Evie, writing to her after the events of the previous months. We discover Charlotte's instant infatuation with Evie, her confusion as she questions her sexuality and the constant questioning over how Evie possibly feels towards her.

In terms of the characters, none of them are very likeable, with the exception of maybe Amy and Noah (Charlotte's sister and her boyfriend). While I can relate maybe to Charlotte on one or two points, I can't relate to Evie's nature at all, and I just couldn't like her as a character. I don't feel the personalities of the supporting characters are easy to like or relate to either.

This story is told with a huge amount of suspense, hinting to us the whole way through that something negative has happened concerning the girls and why Charlotte feels the need to be writing to Evie. It is all very cryptic and the only reason I pushed on with this read was because I did want to know what had happened. Unfortunately I felt the ending was rather anti-climatic and while the story is ultimately about what Charlotte learns about herself and her outlook on life, it just wasn't enough for me.
Posted by Jess - The Tales Compendium at 12:23 PM