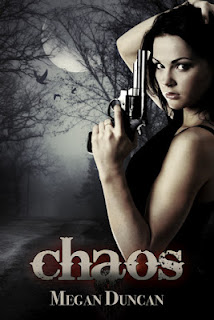 Title: ChaosSeries: Agents of Evil #2Author: Megan DuncanRelease Date: 30th June 2012My Rating: 4/5Previous Book: Released #1Blurb:
Is any shot at living, worth dying for?They thought they’d be safe, but a world ruled by chaos doesn’t die easily.When Max turned on the radio transmissions assuring safety, they came. But, it wasn’t just survivors of the demon apocalypse that crawled their way into the abandoned military base. A myriad of beastly demons unlike any they’ve ever seen, came as well. Abby, and her companions, struggle to survive as the evil around them grows. Desperate to endure, and to defend their fellow survivors, Abby and a squad of fierce fighters, take on a dangerous mission that has deadly consequences.In A Nutshell: An excellent sequel to Released.My Review:In post-apocalyptic America, small groups of survivors hide amongst the ruins in an attempt to live through each day as demons destroy the world they once knew. After finally reaching the military compound, only to find it deserted, Abby, Max, Taya and Carter make it their base, welcoming newcomers as they trickle in, creating some sort of home for those who have already lived through more than anybody should have to in a lifetime.Abby is tough and doesn’t like to show weakness, mostly because she recognises that as a leader, she needs to stay strong for those around her, otherwise the life they have tried to maintain for themselves will crumble. Like most people, though, Abby has a breaking point and she can only stay strong with the help of Max, Carter and Taya by her side. Along with newcomers Drew, Grant and Remie, the group fight to keep their new charges safe and survive the demons that have decimated their lives. On a routine outing to scout for supplies, things go horribly wrong when the group accidentally exposes the hiding place of other survivors to a territorial group of spider demons, destroying the safe haven and injuring the group’s leader. Abby offers them safe haven and medical treatment at their compound but it quickly becomes apparent that their basic medical supplies won’t be enough to heal the wounded. Abby’s promise to do everything she can to help the injured, results in Abby and her group ignoring warnings about a potential new breed of demon and entering a deserted hospital in search of medical supplies. When you’re at war with demons, surprises are around every corner and once again, the group run into trouble that not only surpasses anything they have seen before, but proves fatal.With death always a possibility, our characters learn to appreciate the little, simple things in life and have to wrestle with the possibility that every time they venture out of their base for supplies, someone may not return. Many characters still have their own personal demons to sort through as everyone has lost someone they loved or was important to them. No matter how much danger there is on the outside, internal demons need to be addressed before they resurface at crucial times. In the first book we saw the memories that plague Abby, Max, Carter and Taya and this time the readers are given the opportunity to get a glimpse of Drew, Grant and Remie, which provides depth and heart to their tough, warrior-like personas.There is plenty of action and suspense with a focus on helping other survivors and doing what they can to improve their shocking living conditions. The return of a character from Released is welcome and provides some comfort for our heroes in such a chaotic time.
Posted by Jess - The Tales Compendium at 10:47 AM