Acclaimed Australian author Jaclyn Moriarty, arguably best known for Feeling Sorry for Celia and Finding Cassie Crazy, has a new book coming out! A Corner of White, the first in the Colours of Madeleine trilogy, will be released 18th September 2012.

Described as mesmerising, extraordinary, poetic and deeply moving, A Corner of White is sure to have a spot on your TBR pile in the lead up to September. 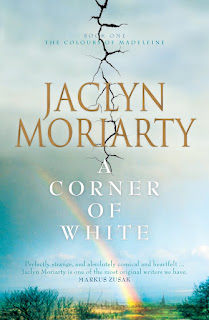 Madeleine Tully lives in Cambridge, England, the World – a city of spires,
Isaac Newton and Auntie’s Tea Shop.
Elliot Baranski lives in Bonfire, the Farms, the Kingdom of Cello – where
seasons roam, the Butterfly Child sleeps in a glass jar, and bells warn of
attacks from dangerous Colours.
They are worlds apart – until a crack opens up between them; a corner of
white – the slim seam of a letter.
A mesmerising story of two worlds; the cracks between them, the science
that binds them and the colours that infuse them.
And if that isn't enough to pique your interest, in the words of Markus Zuzak...


‘Perfectly strange, and absolutely comical and heartfelt ... Jaclyn Moriarty is one of the most original writers we have.’
Posted by Jess - The Tales Compendium at 11:07 AM