Every You, Every Me by David Levithan 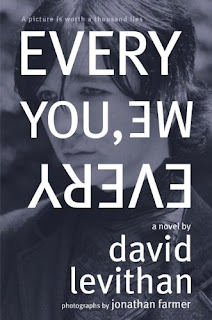 Title: Every You, Every MeAuthor: David LevithanPhotographer: Jonathan FarmerRelease Date: 13th September 2011My Rating: 4/5Blurb:
In this high school-set psychological tale, a tormented teen named Evan starts to discover a series of unnerving photographs—some of which feature him. Someone is stalking him . . . messing with him . . . threatening him. Worse, ever since his best friend Ariel has been gone, he's been unable to sleep, spending night after night torturing himself for his role in her absence.

Creatively told with black-and-white photos interspersed between the text so the reader can see the photos that are so unnerving to Evan, Every You, Every Me is a one-of-a-kind departure from a one-of-a-kind author.

You know one me.Just like I know one you.But you can’t know every me.And I can’t know every you.
Poor Evan. He is drowning in misery, mentally torturing himself for the guilt he feels for his part in the reason Ariel is no longer with him. This reason, and what has happened to Ariel, is not revealed until the end of the story.
My voice is blind, my hearing is mute, my sight is deaf. Art is science, mathematics is conversation, and music is something that bleeds.
Just like Evan, we too are kept on edge as a mysterious person psychologically torments Evan with photographs of himself, where he has been, and of Ariel. Who is this cruel person? How could Evan and Ariel’s ex-boyfriend Jack not know about someone else in her life? As Evan discovers these photographs, he begins to unravel and is forced to participate in this macabre ‘treasure hunt’ in order to find out who this callous person trying to make him suffer is.
This is the thing they don’t tell you about being a third wheel – it’s not like you’re the wheel that is added on. You were one of the original two wheels, but suddenly you’re not so important anymore. The relationship drives fine without you.
Every You, Every Me is written from Evan’s perspective, as if he is talking or writing to Ariel. Ariel is always his audience and he is constantly editing himself, his thoughts, something the reader witnesses the entire way through the book. This was only sometimes annoying. For example:
It was your birthday. The first one after you left vanished were gone.When I woke up, I dreamed thought about other birthdays. Ones where we’d been together.Like two years ago. Freshman year. When I’d had you all to myself.
This is the 6th book I have read by David Levithan. Obviously, as a thriller, it’s very different to the other stories he has written, but I still enjoyed it and would recommend it to those who like this genre (as I do).
Little Well-known Facts
The title comes from the Placebo song, Every You Every Me.This novel was a joint project between David Levithan and Jonathan Farmer. Farmer would give Levithan a photograph who would then write part of the novel incorporating the photo. When Levithan needed the next photo, Farmer would give him one. This is how the whole book was written. Levithan never knew what image he would be given next, and Farmer didn’t read anything until the first draft was complete.
Posted by Jess - The Tales Compendium at 10:41 AM

Labels: 4/5, David Levithan, Every You Every Me, Jonathan Farmer, psychological thriller, Quotes, review