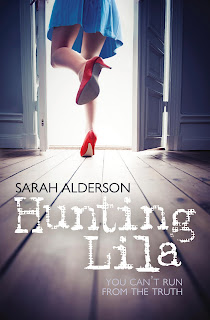 Blurb:
Lila has two secrets she's prepared to take to the grave. The first is that she can move things just by looking at them. The second is that she's been in love with her brother's best friend, Alex, since forever.

After a mugging exposes her unique ability, Lila decides to run to the only people she can trust, her brother and Alex. They live in Southern California where they work for a secret organisation called The Unit, and Lila discovers that the two of them are hunting down the men who murdered her mother five years before. And that they've found them.

In a world where nothing and no one is quite as they seem, Lila quickly realises that she is not alone, there are others out there just like her, people with special powers, and her mother's killer is one of them...

In A Nutshell:
Hunting Lila is an exciting, suspenseful novel that keeps you questioning if all is really as it seems.

My Review:
Lila is an impulsive and curious 17-year-old girl who has been on an emotional roller-coaster for the last five years after the death of her mother and separation from her brother, and it’s just gotten worse as she has somehow developed the ability of telekinesis. After arriving on her brother Jack’s doorstep, she becomes curious as to what it is his military unit actually does as he is cagey and extremely over-protective, as is his best friend Alex (and Lila’s long term crush).

As Lila gets more and more fed up with being kept in the dark and ‘babysat’ around the clock, she starts fishing for information about what their unit are investigating. She has no idea who to trust with her secret, especially because Jack and Alex are still treating her like a child. When the stumbles across the unit’s real mission she has to question what the real truths in her life are, and if she can still trust those closest to her. She also discovers she is not alone in her unique ability.

There are many twists and turns to the story, with the constant question of who is telling the truth, and what parts of the supposed truths are actually lies. It is fast-paced and will keep you on the edge of your seat until the very end. While it doesn’t finish on a traditional style cliff-hanger, you will still find yourself desperately wanting the sequel, Losing Lila, which of course won’t be released until the second half of 2012.

I think Lila’s feeling and actions in regards to Alex are spot on. When faced with being in the company of someone you love but you can’t do anything about, it’s excruciating and I think it was appropriately portrayed. They are very real moments and feelings; not wanting to tell Alex how she feels for fear of rejection, the jealousy she feels when seeing the way other females look at him, how she makes up scenarios in her head and also jumps to conclusions on all manner of subjects.

This was the first book I have read in six weeks. After a family tragedy, I didn’t have the will to pick up a book, let alone review anything. Hunting Lila was the book I chose to ‘get back on the horse’ and I couldn’t have picked a better story to keep my mind occupied and be completely enthralled by the plot and characters.

Absolutely loved it!
Posted by Jess - The Tales Compendium at 3:22 PM