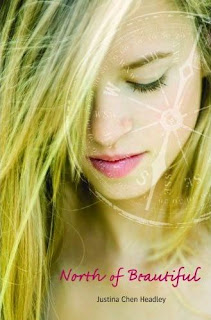 Release Date: 1st Feburary 2009 (US) Not released in Australia

As he continued to stare, I wanted to point to my cheek and remind him, 'But you were the one who wanted this remember? You're the one who asked - and I repeat- -Why not fix your face?'

It's hard not to notice Terra Cooper. She's tall, blond, and has an enviable body. But with one turn of her cheek, all people notice is her unmistakably "flawed" face. Terra secretly plans to leave her small, stifling town in the Northwest and escape to an East Coast college, but gets pushed off-course by her controlling father. When an unexpected collision puts Terra directly in Jacob's path, the handsome but quirky Goth boy immediately challenges her assumptions about herself and her life, and she is forced in yet another direction. With her carefully laid plans disrupted, will Terra be able to find her true path?

My Review:
I absolutely loved this book and it is definitely one of my favourite reads of the year! After finishing it, I wondered why I had never seen any of Justina's books before and why they were lacking from my 'Already Read' list. I now know it is because they are not released in Australia. This is very sad indeed and I certainly look forward to tracking down her other titles.

The Cooper family is without spirit. Living with a verbally abusive father has always had the whole family on edge, tip-toeing around him and soothing his ego. Terra's father is such a horrible person and I found myself really, really hating him. Even though I understand why Terra's mother Lois always stayed with him, reading the book, I still struggled with the fact that she didn't just leave him. A lot of it of course came down to the fact that he had belittled her so much that she never thought she could survive without him.

Everyone in the family has a coping mechanism; Lois comforts herself with food, only giving her husband more ammunition. Oldest brother Merc moves to China, the one place their father will never visit and where he buries himself in his work. Claudius rarely comes home but has bulked up so he is now bigger and more imposing. For Terra, she not only has to deal with her fathers' snipes, she also has to deal with her own lack of self-worth, brought on not only by her father but by the years of name-calling and stares she gets due to her port-wine stain birthmark across one side of her face. Terra fast-tracks herself through high school so she can leave for college faster, loads herself up with extra curricular activities so she spends as little time as possible at home, loses herself in her art and tries every procedure there is in the hope of lightening her birthmark. She also refuses to end her meaningless relationship with her boyfriend Erik due to her fear that no one else will want her. She has no self-esteem, no faith in her looks or in her abilities as an artist. After years of being considered 'ugly' by herself and others, can she ever accept that she is beautiful inside and out and worthy of good things?

A chance meeting with Goth-boy Jacob and his mother Norah opens both Terra and Lois up to new friendships and inspires them both towards having a new outlook on life. Lois, whose spirit has been squashed over the years, slowly rebuilds her self confidence. Terra learns invaluable lessons from Jacob about stereotypes, how you can look at the world, and that the way people view you, can be up to you. Jacob is also one of the most swoon-inducing characters I have ever found between the pages of YA books.

The continuing theme is self esteem, with every character lacking it in some form or another. As well as the Cooper family, Jacob, who Norah adopted when he was three, struggles with having been an abandoned Chinese baby with a cleft lip. Norah, while she appears to be a jet-setting business woman with everything she could want on the outside, is suffering from the indignity of her husband leaving her for a 'bimbette' coffee barista. Even Terra's best friend Karin has to make herself feel better and remind herself that she is 'the pretty one' out of her and Terra.

For those who have read the book (and to those who haven't, I don't think this spoils anything), some of the most powerful scenes to me were when Terra washes her face in the orphanage and her reaction to seeing Peony, Terra leaving Karin sitting in the coffee shop, Jacob asking Norah for help translating in the orphanage, Terra realising why Claudius was always so clumsy, Lois telling her husband she isn't hungry and asking Terra if she is, and when Jacob tells Terra he no longer notices her birthmark.

Justina Chen Headley has created a beautifully written novel where the key to true beauty is accepting yourself. Anyone who has ever felt 'less' because of their looks will be able to relate and hopefully find solace within the pages, the lessons Terra learns and Jacob's outlook on life. A stunning, heart-felt read with characters you will fall in love with and want to read about forever. I can not recommend it enough.
Posted by Jess - The Tales Compendium at 2:54 PM