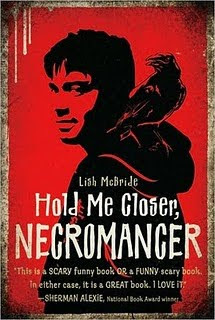 Meet Douglas, not just your average guy but a powerful and violent necromancer who immediately recognises the threat Sam poses to his control of the Seattle paranormal scene.

Suddenly Sam's life takes a distinct turn for the weird. He has an undead friend on his hands, powers he's not sure how to use and a family history that's all news to him.

What's a grill cook to do? With the help of his new were-hound girlfriend, a bratty harbinger and a skill set he never knew he had, Sam battles it out to the bitter, crashing end.

My Review:
I really enjoyed reading Hold Me Closer, Necromancer. At first I thought it was a little slow moving with the introduction of characters other than Sam (whose story starts with quite a few bangs), but after those initial first few chapters, I was completely hooked, reading it in one sitting (not the best thing as I was still trying to get over my jet-lag and I could barely keep my eyes open!). While the content of the story is quite dark, the story is laugh-out-loud funny with plenty of sarcasm.

I really loved all the characters, they were so well written and had such great personalities, especially seventy-year-old Mrs. Winalski from next door, she's an absolute hoot! And Frank. And Brooke. And Brid. Oh I could name every character in the book! All the human characters are very endearing but it wasn't just humans and necromancers that made up the story. There was a whole host of paranormal characters; werewolves, fey, were-hounds, witches, satyrs, even a vampire thrown in briefly. Some of these play very small roles but they add to the whole 'underground' paranormal scene.

This is a book for those who like their paranormal stories with a bit more attitude, some blood and guts, humour and with awesome male and female characters. And while there is a relationship thrown in there as well, it's a little more real than 'Their eyes met and they knew they would be soul-mates forever" blah blah blah. It's also got an added cool bonus that all the chapter titles are taken from rock songs, or adapted to suit the book (like the title).

The closest I can come to comparing it to something else would be the attitude of Rose from Vampire Academy and some of the same kind of spunk and wit from Skulduggery Pleasant (but for older readers).

While the story doesn't need a sequel, I sure would like one. No word yet if there will be one but I'll keep you posted.
Posted by Jess - The Tales Compendium at 9:48 AM