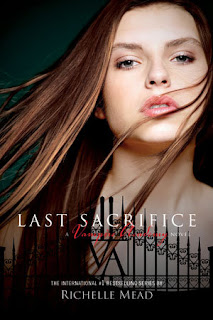 Blurb:
Rose Hathaway has always played by her own rules.

Now the law has finally caught up with Rose- for a crime she didn’t even commit. She’s in prison for the highest offense imaginable: the assassination of a monarch. She’ll need help from both Dimitri and Adrian to find the one living person who can stall her execution and force the Moroi elite to acknowledge a shocking new candidate for the royal throne: Vasilisa Dragomir.

But the clock on Rose’s life is running out. Rose knows in her heart the world of the dead wants her back… and this time she is truly out of second chances. The big question is, when your life is about saving others, who will save you?

My Review:
When I reviewed Spirit Bound earlier this year, I gave it a 5/5 rating. Even though I thought it was fantastic, I now wish I hadn't given it the highest rating, because Last Sacrifice was even better! Fans will not be disappointed with the thrilling conclusion to the best vampire series around. Without spoiling it for those of you who have not read it yet, Last Sacrifice sees the return of old characters, some new characters and lifestyles, tender moments, and of course some sizzling, drool-worthy moments.

I think there was some great character development, especially with Adrian and Lissa, showing new sides of everyone but I was a little disappointed Rose didn't get to kick much Strigoi ass as in previous books. But, she was still the same old Rose and I am very happy with which love interest she ended up with. While some questions are left unanswered (although not essential for you to be happy with the ending) it allows Mead to segue the story into her spin-off series Bloodlines (well hopefully they will be answered!).

This is what Richelle had to say about Bloodlines earlier this year...
"Last Sacrifice will be the last book about Rose, but it'll be followed by a spin-off series still set in the Vampire Academy world. Side characters we know from the current series will now be our main characters, and there'll be a whole new storyline (not the last one told from a different perspective). So far, there is no exact release date, but you can expect it near late summer/early fall of 2011.

Very exciting indeed! And word in the blogosphere is that Sydney Sage and Jill Mastrano will be main characters.