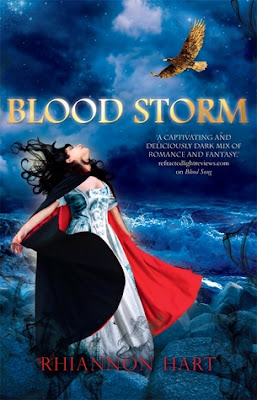 Blurb:
The rain wanted to be ocean; the ice in the mountain caps wanted freedom. I never knew that water held such longing. The clouds above my head rumbled like a growling wolf, impatient to release their burden. I held the rain there a moment longer. I turned to Renata, heard her gasp and knew my eyes glowed blue.

I spoke a single word. 'Rain.'

In the Second Book of Lharmell, Zeraphina and Rodden must travel across the sea to find the elusive ingredients that will help them to win the coming battle against the Lharmellin – but shadows from Rodden’s dark past may come back to haunt him. And while she learns to harness her new abilities, Zeraphina still fights the hunger that makes her crave the north – not to mention avoiding her mother, who wants to see her wayward daughter married to a prince at all costs.

In A Nutshell:
An atmospheric and addictive series that pulls you in and begs you to get lost in Zeraphina and Rodden’s world.


My Review:
It has been several months since Zeraphina destroyed the leader of the Lharmellins and she has spent her time ‘holidaying’ in Pergamia. Her real reason is to learn more about the Lharmellins from Rodden, and to avoid her mother who is on a mission to marry her off to a prince. Unfortunately, her home is where yelbar can be found, a metal deadly to Lharmellins, which Rodden and Zeraphina desperately need. So they leave Pergamia under the cover of night, heading across the continent of Brivora, for Amentia.


Hart’s descriptions were perfect. I could picture all the different locations so clearly and did not get lost in heavy detail. As they travel through deserts, across oceans, through the rich and the poor cities, they meet new people that help and hinder their quest. With harmings hunting them down and their safety depending on one another, the intimacy of trying to survive and the trust they hold in each other leads Zeraphina to question her growing feelings for Rodden. And thankfully, Rodden’s secretive nature finally breaks down midway through the book when he shares his devastating backstory.
Throughout their journey Zeraphina works to harness her new abilities and upon arrival in Amentia, she battles with her mother over her engagement to an arrogant, abusive prince. The injustice of her arranged marriage and the questions of choice and royal expectations are raised in the second half of the book which I thought was a nice offshoot from Zeraphina and Rodden’s quest.

As the second book comes to a close, both their heavily guarded feelings for one another become more obvious as another encounter on Lharmell becomes eminent. Old foes return and their lives hang in the balance, not just from the threat of harmings, but also from the assumptions made by royal families after Zeraphina and Rodden disappeared on the trip together.

Despite a somewhat devastating cliff-hanger, I thoroughly enjoyed Blood Storm and am so please it lived up to the expectations I had after loving Blood Song. As I think many of you know, I often struggle with fantasy, but for some reason Rhiannon Hart’s novels just pull me in and beg me to get lost in the world she has created.

This has been an official stop on the Blood Storm Blog Tour. Check out the other stops featuring reviews of both Blood Song and Blood Storm, as well as guest posts.

SEPTEMBER 24 The Rest is Still Unwritten