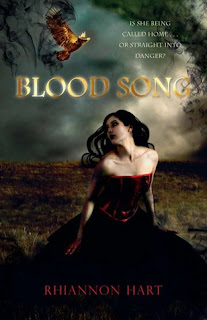 Blurb:
When her sister becomes betrothed to a prince in a northern nation, Zeraphina’s only consolations are that her loyal animal companions are by her side – and that her burning hunger to travel north is finally being sated.

Already her black hair and pale eyes mark her out as different, but now Zeraphina must be even more careful to keep her secret safe. Craving blood is not considered normal behaviour for anyone, let alone a princess. So when the king’s advisor, Rodden, seems to know more about her condition than she does, Zeraphina is determined to find out more.

Zeraphina must be willing to sacrifice everything if she’s to uncover the truth – but what if the truth is beyond her worst nightmares?

In A Nutshell:
Blood Song is the story of a feisty heroine with loyal animals, an infuriating but intriguing boy, a mysterious land and frightful creatures. It has action, adventure, tension and mystery, with a little bit of romance on the side. Utterly captivating!

My Review:
Blood Song, by debut Australian author Rhiannon Hart, is a captivating fantasy novel about a young girl, fighting with who she is and what she is destined to become.

A princess by birth, Zeraphina is more interested in archery and her beloved animals than finding a suitor. She also as a secret; she is constantly battling an inner turmoil of an unknown hunger and searching for an explanation as to why she is so different to her mother and sister.

When she travels north for her sister’s wedding to a wealthy and powerful prince, Zeraphina experiences an unexplainable pull further north to the mysterious Lharmell, a place no one really knows anything about, or if they do, they refuse to talk about it. When she meets the king’s advisor, Rodden, who is in charge of protecting the city's borders from the inhabitants of Lharmell, he appears to know what she is, but refuses to tell her anything. He is infuriating but immensely intriguing and draws Zeraphina in, despite her efforts to remain at a distance.

Zeraphina is naturally inquisitive and feisty, and she finds a sparring partner in Rodden, not to mention a connection unlike any other. The chemistry between the two is filled with both admiration and disgust, neither admitting their true feelings in light of the negative impressions they seem to have made. There is always that sizzling tension that is ignored and a masked ball scene between the two is particularly intoxicating. Hart certainly knows how to raise the level of anticipation!

There were a number of times I was taken by surprise (in a good way) at the direction the story took and found many scenes to be action packed, engaging and suspenseful. Although Rodden originally got on my nerves at his refusal to tell Zeraphina anything, I quickly grew to love him and there weren’t any characters in the story that I disliked. I particularly loved Zeraphina’s animal companions, Leap and Griffin, and their unique abilities of communication. Ultimately I love the world Rhiannon Hart has created and the mythology and medieval aspects woven into it. I am really looking forward to book two. Too bad it won’t be released until 2012!

Thankyou to Random House Australia for this review copy.
Posted by Jess - The Tales Compendium at 6:32 PM