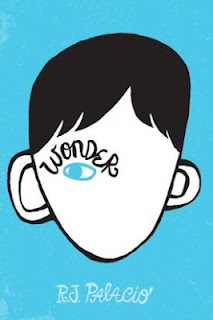 Blurb:
I won't describe what I look like. Whatever you're thinking, it's probably worse.

August (Auggie) Pullman was born with a facial deformity that prevented him from going to a mainstream school—until now. He's about to start 5th grade at Beecher Prep, and if you've ever been the new kid then you know how hard that can be. The thing is Auggie's just an ordinary kid, with an extraordinary face. But can he convince his new classmates that he's just like them, despite appearances?

R. J. Palacio has written a spare, warm, uplifting story that will have readers laughing one minute and wiping away tears the next. With wonderfully realistic family interactions (flawed, but loving), lively school scenes, and short chapters, Wonder is accessible to readers of all levels.

In A Nutshell: A heart-warming story that everyone should read!

My Review:
Nothing I could possibly say would do Wonder justice. It is such a beautifully written, heartbreaking, but heart-warming, story.

Wonder follows ten-year-old August Pullman as he experiences his first year at school, having been home-schooled until now. What makes his story worth reading is that Auggie has severe facial deformities, and for a world that continues to judge people on their appearance, this new experience will not be an easy one. Told from multiple perspectives including August’s sister Via, his new friends Jack and Summer, Via’s boyfriend Justin, and August himself, we are able to see how other people view August and how he has impacted and influenced their lives, and vice-versa.

Wonder is a story about bullying, acceptance, respect, friendship, sacrifices, self-esteem, love and family. It is a story of enormous courage, as one little boy grows up over the course of a year, and touches so many people’s lives in the process. From a social outcast to someone who brings his whole school together, over the course of a year, August Pullman is a boy who used to hide, but now stands front and centre.

This is a novel everyone should read; children (9+), teenager and adult, and you will particularly enjoy it if you liked North of Beautiful, Skin Deep, Five Flavours of Dumb and/or Beautiful Monster.

I know I’m not a normal ten-year-old kid. I mean, sure, I do ordinary things. And I feel ordinary, inside. But I know ordinary kids don’t make other ordinary kids run away screaming in playgrounds. I know ordinary kids don’t get stared at wherever they go.
If I found a magic lamp and I could have one wish, I would wish that I had a normal face that no one ever noticed at all. I would wish that I could walk down the street without people seeing me and then doing that look-away thing. Here’s what I think: the only reason I’m not ordinary is that no one else sees me that way.
But I’m kind of used to how I look now. I know how to pretend I don’t see the faces people make. -August, Ordinary

Does August see how other people see him, or has he gotten so good at pretending not to see that it doesn’t bother him? Or does it bother him? When he looks in the mirror, does he see the Auggie Mum and Dad see, or does he see the Auggie everyone else sees? Or is there another August he sees, someone in his dreams behind the misshapen head and face?
I wish I could ask him this stuff. I wish he would tell me how he feels.
-Via, August Through the Peephole

********
It’s like some people you see sometimes, and you can’t imagine what it would be like to be that person, whether it’s somebody in a wheelchair or somebody who can’t talk. Only I know that I am that person to other people, maybe to every single person in that whole auditorium.
To me, though, I’m just me. An ordinary kid.
-August, Floating


Second Opinions
So Much to Tell You
Posted by Jess - The Tales Compendium at 9:41 AM